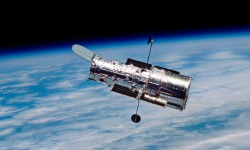 Thanks, Hubble, for everything, including your cool CCD technology.
Stocktrek Images/Getty Images

If you were to peek inside the Hubble Space Telescope, you'd find a lot of high-tech sensors and wiring. But one piece in particular has found its way into the medical realm on Earth.

Charge-coupled devices (CCDs) possess the ability to "digitize" light into data. In other words, they offer an easier way to convert light energy (from photons) into digital images than other imaging methods. In 1997, NASA created a "supersensitive" CCD for Hubble to increase the quality and breadth of phenomena it could image in the cosmos.

But the LORAD Corporation picked up on the idea for a new way to scan female patients for breast cancer [source: NASA]. Just as the supersensitive sensor allowed Hubble to gather more details about structures and events in space, the CCD allows doctors to perform more precise tests on women who may have breast cancer.

Rather than taking a larger biopsy, or tissue sample, from patients, the CCD provides greater detail when pinpointing areas of concern in the human body. As a result, women could undergo a less invasive, lower-cost procedure when compared to other techniques.

The same invention that quenched astronauts' thirst in space has left its mark on those on Earth as well.