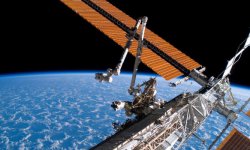 Researchers at NASA didn't invent solar cells, but the organization did help keep the technology alive during the years when it was still largely uneconomical. Solar power has long been of interest at NASA, starting with Vanguard 1, the first artificial satellite powered by solar cells to start circling the globe. It launched in 1958, just four years after the first modern solar cell debuted, although it fell silent by 1964.

General interest in solar power waned after the energy crisis in the 1970s, but NASA was still a paying customer, pushing for the development of more efficient and affordable solar cells. Among the many spinoff products that came from these ongoing research efforts were solar-powered refrigerators, solar-powered air conditioners, long-lasting and low-energy lighting options, solar-powered air monitoring systems and solar-powered hot water heaters.