by Shanna Freeman
Prev NEXT
3 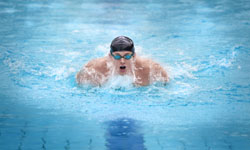 What does space flight have to do with swimming? Both swimmers and space shuttles experience a phenomenon called viscous drag, the force that slows down an object when it encounters friction while moving through a fluid such as air or water. In competitive swimming, winners are determined by hundredths of a second, so reducing drag can mean the difference between a win and a loss.

NASA's Langley Research Center uses wind tunnels to study fluid dynamics, the flow of fluids in motion. Studying these forces helps NASA come up with more aerodynamic designs for future vehicles. SpeedoUSA, known for its swimwear, decided to enlist the help of researchers at Langley to design a more efficient swimsuit following the 2004 Olympics. Using a wind tunnel, they tested the effects of surface drag on more than 100 different materials and coatings, as well as different types of seams.

As a result of the study, Speedo developed the LZR Racer. Made of a water-resistant, lightweight fabric, the swimsuit sported ultrasonically-welded seams (which reduce the drag caused by traditionally-sewn seams by 6 percent). It reduced drag from exposed skin by covering more of the body, and compressed the swimmer's core to ensure good form and help expend less energy while swimming.

Swimmers wearing the LZR Racer have been very successful -- Michael Phelps wore one when he won his eight gold medals at the 2008 Olympics. This NASA-inspired swimsuit has given competitive swimmers such an edge that, FINA, the governing body for competitive swimmers, put restrictions on its use in 2009.