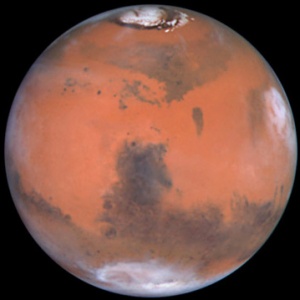 As you can see from the accompanying image, Mars has few distinguishing features when viewed from Earth, even with the best telescopes. There are dark and light areas, as well as polar ice caps, but certainly not the clear features that you can see in images from orbiters around Mars. Therefore, we can excuse early astronomers for making mistakes or embellishing their observations. To these scientists searching the sky, Mars was a vastly different world than we know today.

In 1877, Giovanni Schiaparelli, an Italian astronomer, became the first person to map Mars. His sketch showed a system of streaks or channels, which he called canali. In 1910, the U.S. astronomer Percival Lowell made observations of Mars and wrote a book. In his book, Lowell described Mars as a dying planet where the civilizations built an extensive network of canals to distribute water from the polar regions to bands of cultivated vegetation along their banks.

Although Lowell's book captured the public's imagination, the scientific community summarily dismissed it because his observations weren't confirmed. Nevertheless, Lowell's writings sparked generations of science fiction writers. Edgar Rice Burroughs of Tarzan fame wrote several novels about Martian societies, including "The Princess of Mars," "The Gods of Mars" and "The Warlord of Mars." H.G. Wells wrote "The War of the Worlds" about invaders from Mars (Orson Welles' radio play of this book caused a national panic in 1938).

Hollywood has also fueled the public's fascination with the planet in films such as "The Angry Red Planet," "Invaders from Mars" and, more recently, "Mission to Mars," two versions of "Total Recall," and a live-action version of Burroughs' titular hero in "John Carter."

In the 1960s and 1970s, however, the American Mariner, Mars and Viking missions started sending back images of a world very different from that described by Lowell and his literary and silver-screen successors. The photos, snapped during flybys of the planet and eventually during the Viking landings, showed Mars as a dry, barren, lifeless world with variable weather that often included massive dust storms that could whip across a majority of the planet. So with thousands of photos as evidence, Mars was confirmed as a desert planet with rocks and boulders, rather than the home of irritable Martians and man-eating plants a la "The Angry Red Planet."

Now, we have extensively mapped the planet with Mars Global Surveyor, sent rovers to bump over its surface and scoop up soil samples, and launched orbiters to observe the planet from space. More missions are in the works. NASA and the European Space Agency (ESA) have committed to continued robotic and possibly human exploration of Mars.

So far these missions have enabled scientists to hazard a theory about how the red planet formed, and the story would actually make a pretty good movie. Read on to learn how solar system collisions gave Earth its next-door neighbor.