The Surface of Mars 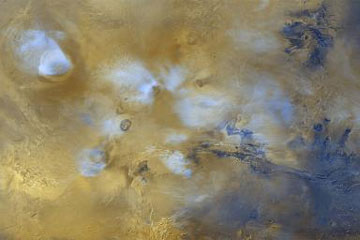 We can divide the surface of Mars into three major regions:

The southern highlands are extensive. The region's elevated terrain is heavily cratered like the moon. Scientists think the southern highlands are ancient because of the large number of craters. Most cratering in the solar system happened more than 3.9 billion years ago, at which point the rate of meteors bashing into the solar system's planetary bodies dropped steeply.

The northern plains are low-lying regions, much like the maria, or seas, on the moon. The plains show lava flows with small cinder cones -- evidence of volcanoes -- as well as dunes, wind streaks, and major channels and basins similar to dry "river valleys." There is a distinct change in elevation, of several kilometers, between the southern highlands and the northern plains.

Two continent-sized, high regions called crustal upwarps spread over the northern plains. In these upwarps areas the molten rock from the interior mantle pushed up the planet's thin crust, forming a high plateau. These regions are capped with shield volcanoes, where molten rock from the magma broke through the crust. The smaller region, named Elysium, is in the eastern hemisphere, while the larger one, called Tharsis, is located in the western hemisphere.

The highest point in the solar system that we know about rises up in the Tharsis region. This shield volcano called Olympus Mons (Mount Olympus from Greek mythology) towers 16 miles (25 kilometers) above the surrounding plains, and its base spans 370 miles (600 kilometers). In contrast, the largest volcano on Earth is Mauna Loa in Hawaii, which rises 6 miles (10 kilometers) above the ocean floor and is 140 miles (225 kilometers) wide at its base.

We can see the polar regions from the Earth. Surrounded by vast dunes, the northern and southern polar ice caps seem to be made mostly of frozen carbon dioxide (dry ice) with some water ice. Like Earth, Mars has an axial tilt that causes it to experience seasons. The size of the polar ice caps varies with the season. In the summer, the carbon dioxide from the northern ice cap sublimes, or turns directly from ice to steam, revealing a sheet of water ice below. In fact, the water ice in this northern region is the reason why NASA sent the Phoenix lander there. With the help of its robotic arm, Phoenix dug down to the frozen layer and examined soil samples to investigate its composition.