Storm Chaser on the Hunt 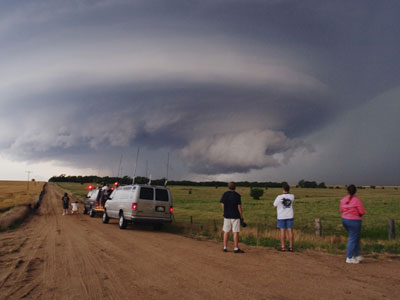 Storm chasing isn't nonstop action and danger. It's actually a very methodical practice that requires lots of time spent studying weather data, driving, waiting and more driving. Storm chasers can spend 12 hours or more driving around and still not see a tornado of any kind. Byron Turk, navigator for the Discovery Channel's Storm Chasers series, describes the process like this:

We find the storm hopefully before it gets dark, and hopefully it produces a tornado, and hopefully there are roads to it. Lots of decisions need to be made on how the supercell is doing, whether another one is more worthwhile, more data comes in and it's just a constant process of making the right decision over and over again. Hopefully.

In the southern states, storm chasing season runs from March through May. Further north, tornadoes are more common through the summer months [source: National Severe Storms Laboratory]. Storm chasers who don't live in the area will set up camp in a hotel room or other rented space.

Before bed and first thing in the morning, storm chasers check weather reports from the National Weather Service (NWS), looking for favorable tornado conditions. Cold air at high altitudes with warm air close to the ground is a promising sign, along with wind shear, or winds at different altitudes blowing in different directions [source: Trueit]. Areas where cool air masses collide with warm air masses are also tornado spawning grounds. After analyzing the weather data, the chasers select a likely location. Then they hop into their chase vehicle and start driving.

All storm chasers carry radios, phones and computers that allow them to receive a continuous flow of updated weather information. They can look at NWS data or talk to SkyWarn spotters, people scattered across the country who are trained to observe and report storms. At the very least, two people go on a mission -- one can drive while the other checks weather data and tracks the twister.

The chasers may have to drive for several hours just to get to their target location. On the way, weather updates might force them to revise their plan. If they've read the weather data correctly (and with a little luck), they'll find themselves within visual distance of a storm. Once they spot towering cumulonimbus clouds, they'll know they're on the right track. The storm chasers zero in on the storm while listening to SkyWarn reports. These reports can pinpoint a specific location where a tornado or conditions known to produce tornadoes have already been spotted. Another important clue: NWS issues a tornado watch or tornado warning for an area.

As they close in on the storm, the chasers will watch for several elements. One is the counterclockwise rotation of clouds typical of a supercell, evidence of strong air currents within the storm. Another is a wall cloud, a cloud that seems to descend from the bottom of the storm. Wall clouds don't always produce tornadoes, but they're a sign that one might be forming.

At this point, the chasers might have time to look for a good place to observe the tornado. Ideally, they would set up on a hill about three miles away to get the best view [source: Trueit]. Once a funnel cloud forms and a tornado touches ground, one of the chasers will track its movement by watching it against a stationary background object. A tornado can change directions suddenly, but in general the storm chasers will make sure they can move perpendicular to its path to get away if they need to.

In the next section, we'll look at the equipment storm chasers use.

Most of the time, when we talk about storm chasers, we're talking tornado chasers. There are people who track and even enter hurricanes, but no one really has to "chase" a hurricane. If there's a hurricane going on, you'll know where to find it.

People have been flying planes right into hurricanes since World War II. The key is high altitude. The severe winds throw planes around in seemingly random directions, sometimes thousands of feet at a time. If the plane was flying too low, it could easily be slammed down into the sea or land. By flying inside the hurricane, meteorologists can get extremely accurate measurements of the conditions there. They can also fly above the hurricane and drop weather instruments down into it.