The Nature of the Beast: Tornado Basics 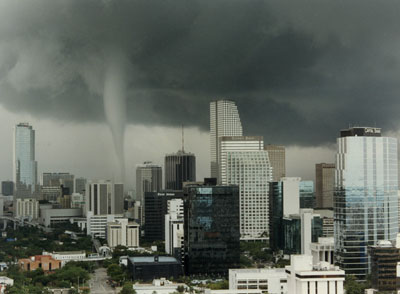 A tornado strikes down in Miami, May 12, 1997
Miami Herald/Getty Images

To hunt tornadoes, you need to understand them. A tornado is a swirling mass of air that can reach wind speeds above 300 mph. It's spawned from severe thunderstorms with enough energy and the proper conditions to start a "cyclone" of spinning air. Tornadoes can happen anywhere and at any time, but they tend to happen most frequently in the late evening or during the night, when thunderstorms sweeping across the land have picked up energy from the heat of the day. Tornadoes are most commonly encountered in North America, in a huge area ranging from the Rocky Mountains east to the Atlantic Ocean, and from Mexico into Canada. Ohio, Illinois, Missouri, Kansas, Nebraska, Arkansas, Kentucky, Alabama, Oklahoma and Texas are known for tornadoes, but devastating tornadoes have hit Florida, Pennsylvania and other states.

A tornado can be accompanied by frequent lightning, straight-line winds, heavy rain and hail. All these factors add to the danger of a tornado. The tornado itself causes injury and death in three ways:

Des­pite decades of research, we still don't fully understand tornadoes. No one is sure what causes some storms to produce them while other storms don't, or why a few storms produce massive outbreaks of dozens of tornadoes. We do know that they form inside supercells, huge storm clouds that reach up to the stratosphere (an altitude of six miles). Within a supercell, massive quantities of air flow in an updraft. If the horizontal air movement within the supercell is flowing in different directions (wind shear), this could create a spinning effect, known as a mesocyclone. The updraft tilts the mesocyclone so that it is upright, which then allows the updraft itself to start spinning. All the energy within the storm begins to fuel this cyclone. If it touches the ground, it can cause tremendous damage.

Next, we'll check out a day in the life of the people who drive around chasing these dangerous, unpredictable storms.

Tornado intensity is measured by the Fujita Scale. Because it's very difficult to measure the wind speed of a tornado as it's happening, and because it's very rare for anyone to be present with the necessary equipment and expertise necessary to even try, we measure them indirectly, based on the damage they do. Certain types of damage are good indicators of the wind speed within the tornado. For example, if a roof is torn off of a modern, well-built home, wind speed is estimated between 156 and 206 mph, a category F3. F0 tornadoes are the weakest, while an F5 tornado is a monster, with winds moving at least 261 mph. There is no such thing as F6 or beyond -- there is technically no upper limit to the F5 category, although scientists don't think it's possible for tornadoes to hit speeds much higher than 320 mph.

Today, meteorologists use an Enhanced Fujita Scale, sometimes referred to as the EF scale. It's basically the same scale, just refined and more detailed.