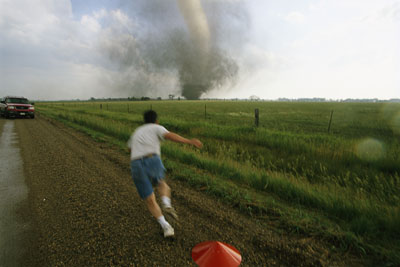 Near Woonsocket, S.D., a storm chaser plants a weather probe in the path of a tornado.
Carsten Peter/National Geographic/Getty Images

What could possibly drive people to place themselves near these dangerous storms? There are a few reasons.

So what have we learned about tornadoes in the last few years? Meteorologists have zeroed in on the conditions that cause them. We still don't know exactly when and where a tornado will form, but we're getting closer. Each time a storm chaser gets close to a tornado, another piece is added to the puzzle. A Discovery Channel crew captured footage of "minitornadoes" revolving within the main tornado in 2007. Later, computer modeling used this information to develop a more accurate picture of tornado formation and life cycle [source: Storm Chasers blog]. People once thought that tornadoes were simply smaller versions of hurricanes, an idea that seems laughable now. Yet modern examinations of supercell air currents reveal large-scale cyclonic action -- big thunderstorms swirl in a way not unlike that of a hurricane [source: Rosenfeld].

In addition to prediction, scientists are puzzled by several other aspects of tornadoes. One important mystery: Why do they develop such incredible wind speeds? Every thunderstorm contains enormous quantities of energy, energy on such a scale that they are compared to nuclear weapons. How that energy is sometimes converted to whirling wind speeds above 300 mph is still a mystery.

Peggy Willenberg and Melanie Metz (they're not actually related) are a storm chasing duo from Minnesota. They provide storm coverage for several news organizations, and also promote storm chasing tours. Although neither is a professional meteorologist, they both have meteorological training to the extent that they give presentations at conferences and conduct weather workshops. The Twister Sisters stand out among the usual "boys club" storm chasers, but they've never gone storm chasing with Dee Snider.