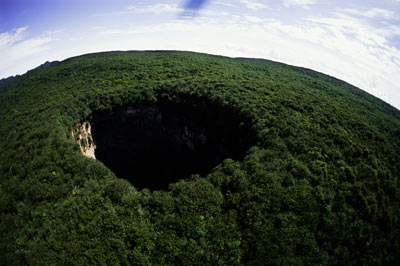 Aerial view of a Sarisarinama sinkhole in Bolivar, Venezuela. If you tumble in there, will you reach the lost world?
Juan Silva/­Getty Images

Perhaps no sinkhole is more distinctive than the Qattara Depression. The massive sinkhole is more like a large basin, stretching across a wide swath of Egypt. It's considered the largest naturally forming sinkhole on Earth [source: WebEcoist]. The depression is "only" 436 feet (133 meters) deep, but it's also 75 miles (120 kilometers) wide and 50 miles (80 kilometers) long. The depression's difficult terrain made it an important defensive border for the British army during World War II, and now it's considered a tourist attraction. Various schemes have been conceived to harness the Qattara Depression for energy production. One possibility calls for filling it with water and then using the basin's low elevation and water evaporation as part of a hydro-solar project.

­Like the Qattara Depression, sinkholes can be beautiful and relatively harmless, though frequently the difference between stunning and disastrous is a matter of location. Venezuela is known for its Sarisarinama sinkholes: basins 1,000 feet (305 meters) wide and at least that deep that are practically perfect circles. These sinkholes are made more distinctive by where they appear; they lie on top of high mesas in the country's tepui region. Tepuis are incredibly isolated areas filled with lush forests and waterfalls. Sarisarinama sinkholes were first discovered in 1974, high up on flat-topped tepui mountains, and have been described as part of a "lost world" [source: Melham]. These sinkholes have been treasure troves for scientists, who remain fascinated by the unique plant and animal species found nowhere else but in some Sarisarinama sinkholes. The sinkholes and the tepuis have also attracted numerous explorers throughout the centuries, some lured by the challenge of their remote setting, others following rumors of massive gold nuggets washing up in streams on top of tepuis.

­If you've ever seen the "Planet Earth" documentary series, then you're probably familiar with cenotes, water-filled sinkholes connected to underwater caves and streams. Cenotes often form gorgeous swimming spots and feature underwater caves, waterfalls and other intriguing formations. The Bimmah Sinkhole in the Middle Eastern nation of Oman is similar. This sinkhole attracts many tourists to its shimmering, translucent blue-green water. Similarly, Mount Gambier in southern Australia is known for its picturesque water-filled sinkholes and volcanic craters. Some of these sinkholes contain well-manicured, terraced gardens.

One of the world's centers of sinkhole activity is the Dead Sea, the salty body of water sandwiched between Israel and Jordan. The Dead Sea is the lowest point on the planet (1,371 feet or 417 meters below sea level) and an important tourist and historical site, as well as part of a migratory route for hundreds of millions of birds. The water level of the Dead Sea has been dropping yearly because of work by the mineral extraction industry and diversion of water from the Jordan River, which feeds the sea, for use in watering crops and providing drinking water.

The newly uncovered areas of the Dead Sea have become riddled with sinkholes. Evaporating freshwater pools are breaking down salt deposits, creating "holes" and destabilizing the ground, leading to sinkholes. Various remedies have been proposed, including multibillion-dollar canals connecting the Dead Sea to the Mediterranean or Red seas. One scientist has theorized that a point of equilibrium will inevitably be reached, as the sea will become too salty to further evaporate [source: Anderson]. But by then, the Dead Sea will be about one-third of its early 21st century size, and in the meantime, resorts around the sea have struggled with receding waters and the unstable, sinkhole-laden earth left behind.

For more information about sinkholes and other related topics, please explore the links that follow. ­