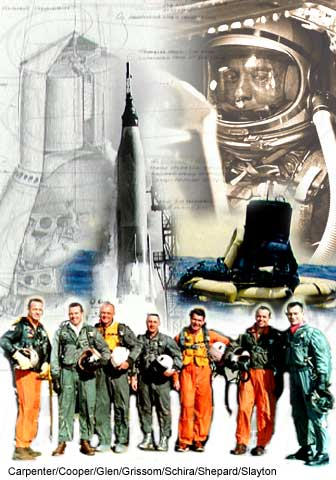 Imagine: The United States is technologically behind in a race with its adversary, the Soviet Union, to explore the new territory of outer space. You have been chosen from a pool of 110 qualified pilots to be one of seven men to go into outer space. You have trained long hours, both physically and mentally, for this mission. You have watched the explosions of many of the same kind of rockets that will be carrying you into space. Now you sit atop one of those rockets filled with explosive rocket fuel. Mission Control is counting down. The world is watching you on television. In minutes, you will be either in outer space or dead from a massive explosion. There is no turning back. The fate of the fledgling space program is riding on you and the success of your mission.

This was the situation on May 5, 1961, when astronaut Alan B. Shepard, Jr. stepped into his Freedom 7 capsule and became the first American to go into outer space. Freedom 7 was the first flight of Project Mercury, America's premiere space program.

If you did not live through this time, it may be difficult to understand the significance of this program and these men. America was in the midst of the Cold War with the Soviet Union (Russians), and the two countries were racing for dominance of outer space. The Soviets were the first to launch a satellite into outer space, Sputnik. Although America was behind in the race, the accomplishments of Project Mercury set the stage for America's later moon landings and eventual domination of space exploration.

In this edition of How Stuff Works, we will relive history as we look at Project Mercury -- the spacecraft, the missions and the people who made it all possible.