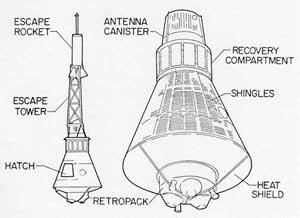 The Mercury spacecraft was designed to carry one man alone into outer space and return him safely. It was cone-shaped -- 6.8 feet (2 m) long, 6.2 feet (1.9 m) in diameter at the base -- with a small cylinder on top. The spacecraft weighed between 2,300 and 3,000 pounds (1,043 to 1,360 kg), depending on the mission, and sat on top of a booster rocket. Atop the spacecraft, there was an emergency escape tower that could lift the capsule off the booster, raising it to an altitude where the parachutes could open and return the capsule and astronaut to the ground at a safe distance from the launch pad. On the blunt end of the spacecraft there was a heat shield, which protected the capsule from the heat of re-entry, and a retro-pack, which were small rocket thrusters that slowed the spacecraft down for re-entry.

Like any spacecraft, Mercury had to provide the following systems:

The Mercury spacecraft had two boosters, the Redstone and Atlas rockets. Both rockets were ballistic missiles that were modified to carry spacecraft payloads instead of warheads.

NASA encountered several failures of the early Redstone and Atlas launches, with the launch vehicles exploding at various stages. When the problems were fixed, unmanned and animal launch tests were conducted. The Redstone was used on the first two manned suborbital flights, but it was not as powerful as the Atlas. The Atlas was used to place men into orbit on the remaining Mercury flights.