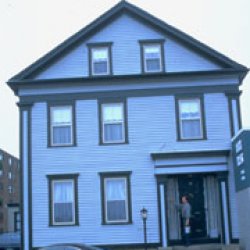 This next entry on the list isn't haunted, but it was the scene of one of the most notorious murder cases in American history -- the Lizzie Borden case. In the morning hours of Aug. 4, 1892, in Fall River, Mass., Andrew and Abby Borden were murdered with a hatchet in their home. Their 32-year-old daughter Lizzie and the housekeeper were the only people home at the time. Lizzie was arrested for the murders seven days later. The children's song claims that 81 whacks did them in -- the actual number of blows was 29.

Lizzie was acquitted for the brutal crimes after a trial produced no murder weapon, motive or physical evidence. Speculation remains today as to whether Lizzie had anything to do with the murder of her parents. After subsequently being ostracized from the community, she lived out her life quietly and died of pneumonia at the age of 67. The house is now a bed-and-breakfast, and its owners bank on its famous history to lure in guests. You can stay in Lizzie's or her parents' rooms and even eat the same breakfast that the Bordens ate on that fateful morning. For just $1,500, you can rent the entire house and even get married in the very room where the Borden parents were hacked up. What a bargain.