La Fonda on the Plaza 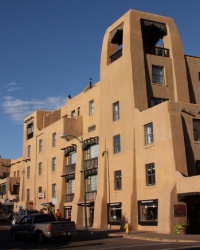 The La Fonda on the Plaza hotel looks innocent enough in the daylight, but come nightfall ...
Nina Raingold/Getty Images

In the heart of Santa Fe, N.M., hauntings abound at the La Fonda on the Plaza hotel. Its rowdy history has created plenty of fodder for supernatural superstars to reportedly still roam its halls. This hotel has had as many owners and names as it has had ghosts in residence. Among the apparitions patrons have noted over the years is that of a distraught salesman, who is said to have thrown himself into the well on residence after he plunged his company into financial ruin. Then there's the ghost of a judge, who was shot by the local official he offended in 1867 and subsequently died of his wounds in the hotel lobby [sources: Ellison, La Fonda].

Other apparitions make rarer appearances, but guests interested in seeing these ghosts might want to try a corner on the east side of the third floor, as well as the hotel's Santa Fe room. Or travelers might find luck in seeing supernatural sightings in more locations within this haunted hotel.

Up next, we're headed to the Big Apple for some serious spirit seeking.