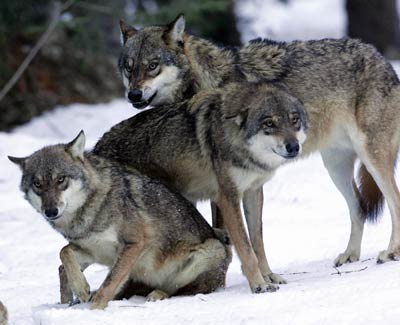 It's hard to pin down the world's first reference to werewolves. One of the oldest known written works on the planet, "The Epic of Gilgamesh," is a likely candidate. In it, Gilgamesh refuses to become the lover of the goddess Ishtar because of her cruel treatment of her previous suitors. Ishtar turned one man, a shepherd, into a wolf, making him the enemy of his friends, his sheep and even his own dogs.

Ishtar isn't the only ancient god to change a mortal into a wolf. In Ovid's "The Metamorphoses," a traveler visits the home of King Lycaon of Acadia. Lycaon suspects that the visitor is immortal, so he devises a test. He serves human meat to his guest, who unfortunately turns out to be the god Jupiter. Jupiter immediately recognizes the meat's origin, and he transforms Lycaon into a wolf. Lycaon's name and the word lycanthropy both come from the same root -- the Greek word lykos, meaning wolf.

Both of these works are ancient, and they suggest that the idea of men turning into wolves has been around for about as long as human civilization has. On top of being old, the idea is widespread. For the most part, if wolves live or have lived in a particular region, that region's folk tales include werewolves. In regions where there are no wolves, stories describe people turning into other carnivorous animals. Stories from parts of Africa describe people turning into hyenas or crocodiles. In Chinese folk tales, people become tigers, and in Japanese stories, they become foxes. Some Russian stories describe people who turn into bears.

In all of these stories, shape-shifters tend to inspire fear. That fear comes from three basic sources:

Being bitten isn't the only way to become a werewolf, though. Next, we'll take a look at other methods used to transform from a human into a wolf.

The word "lycanthropy" originally referred to a mental illness -- a delusion of being a werewolf. Today, many people use "lycanthropy" to mean "the ability to transform into a wolf" and "lycanthrope" to mean "werewolf."