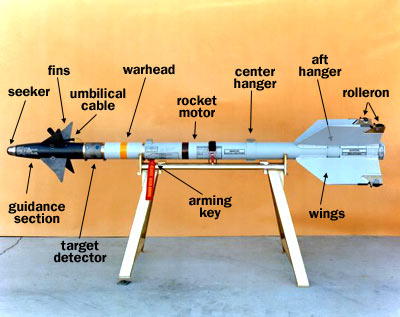 To see how all these pieces work together, let's examine a typical attack sequence.

Securing a Sidewinder to the missile launcher on an F-15 Eagle
Photo courtesy U.S. Department of Defense

Each of the four rear wings, which provide the necessary lift to keep the missile flying, is outfitted with a simple stabilizing device called a rolleron. Basically, a rolleron is a metal wheel with notches cut into it. As the missile speeds through the air, the air current spins the rolleron like a pinwheel.

The rollerons on the rear wings help stabilize the missile in flight.
Photo courtesy U.S. Department of Defense

If you've read How Gyroscopes Work, you know that a spinning wheel resists lateral forces acting on it. In this case, the gyroscopic motion counteracts the missile's tendency to roll -- to rotate about its central axis. The simple, cheap rollerons steady the missile as it zips through the air, which keeps the seeker assembly from spinning at top speed. This makes it a lot easier to track the target, as we'll see in the next section.