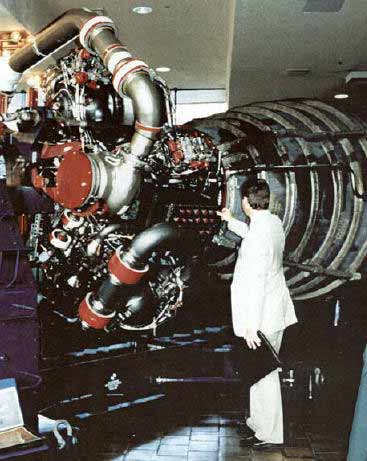 One of the space shuttle's main engines
Photo courtesy NASA

Let's look at these components closely.

Because the SRBs are solid rocket engines, once they are ignited, they cannot be shut down. Therefore, they are the last component to light at launch.

The main engines provide the remainder of the thrust (29 percent) to lift the shuttle off the pad and into orbit.

The engines burn liquid hydrogen and liquid oxygen, which are stored in the external fuel tank (ET), at a ratio of 6:1. They draw liquid hydrogen and oxygen from the ET at an amazing rate, equivalent to emptying a family swimming pool every 10 seconds! The fuel is partially burned in a pre-chamber to produce high pressure, hot gases that drive the turbo-pumps (fuel pumps). The fuel is then fully burned in the main combustion chamber and the exhaust gases (water vapor) leave the nozzle at approximately 6,000 mph (10,000 km/h). Each engine can generate between 375,000 and 470,000 lb (1,668,083 to 2,090,664 N) of thrust; the rate of thrust can be controlled from 65 percent to 109 percent maximum thrust. The engines are mounted on gimbals (round bearings) that control the direction of the exhaust, which controls the forward direction of the rocket

The ET is covered with a 1-inch (2.5 cm) thick layer of spray-on, polyisocyanurate foam insulation. The insulation keeps the fuels cold, protects the fuel from heat that builds up on the ET skin in flight, and minimizes ice formation. When Columbia launched in 2003, pieces of the insulating foam broke off the ET and damaged the left wing of the orbiter, which ultimately caused Columbia to break up upon re-entry.

Next, we'll look at the orbital maneuvering system and liftoff.

The Trouble with O-rings

During the January 1986 launch of Challenger, the temperature was below zero. The cold shrank the rubber o-rings and they did not seal the joints properly. During ascent, hot gases escaped through one of the joints of the SRB. Like a blowtorch, the gases cut through the thin skin of the ET and ignited the liquid hydrogen fuel. Challenger broke up and the crew was lost. NASA re-designed the SRB joints, implemented new rules regarding launches in cold weather, and built a new system for the crew to escape from the shuttle during ascent.