by John Perritano
NEXT PAGE 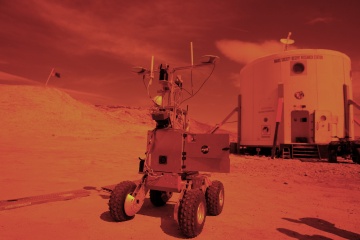 Snapshot of the Mars Society Desert Research Station in Hanksville, Utah, photographed, of course, with an orange filter.
© David Howells/Corbis

One day, like the 30 or so before it, Benjamin Driscoll sowed a bunch of different tree seeds as he trudged across the barren Martian landscape. As Driscoll drifted off to sleep, the rains came. When he awoke, the surface of Mars was covered in trees: "And not little trees, no, not saplings, not little tender shoots, but great trees, huge trees, trees as tall as ten men ..."

In the mind of sci-fi author Ray Bradbury, who created Driscoll for the short story "December 2001: The Green Morning," a story that became part of "The Martian Chronicles," terraforming was relatively easy. Sprinkle a few seeds here, a few seeds there, and before you know it, the rains come and a biosphere explodes in green rapture.

In the real universe, the process of making a hostile and alien environment into one suitable for human life is much more complicated. Still, that hasn't stopped scientists from researching different ways — some really out of this world — to create Earth-like environments on other planets, asteroids and moons.

The reason is simple: If we humans are to shake off our earthly shackles to explore the vastness of the universe, we'll have to find ways of creating ports of call from one end of infinity to the other. One way to do this is to tinker with an alien-world's environment and make it livable for human space travelers. It's a process called terraforming. As you read these words, scientists are trying to figure out mechanisms to create sources of oxygen, water and plant life in order to engineer a suitable human habitat on such foreign worlds. They're engaged in this effort because, after all, Earth won't be around forever [sources: NASA].