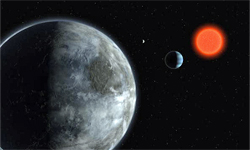 When scientists first discovered Gliese 581c, a confirmed super-Earth, in 2007, they thought the planet was, just possibly, capable of hosting life. Up to that point, Gliese 581c was one of the smallest exoplanets ever found, meaning it was likely rocky rather than gaseous. What's more, its orbit was right on the cusp of its star's habitable zone, meaning the planet might have liquid water. Scientists were so enthusiastic about the possibility of life on the planet that they beamed photos and text messages its way in 2008 [source: Empsak].

Unfortunately, subsequent research has tempered the initial excitement over Gliese 581c. We now know that the planet's orbit is slightly outside of the habitable zone and that, as a result, Gliese 581c's surface is likely too warm to have liquid water. That means we'll have to put any distant plans to colonize the planet that's 20.5 years away from our own on hold. That may be for the best, though; a year on Gliese 581c lasts just 13 days, so we'd have to spend a fortune on calendars [source: Sample].