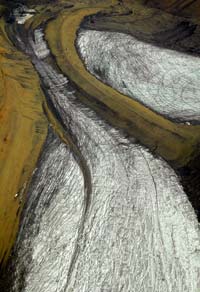 Glaciers don't pass through the land quietly. Here are some other geologic signs that a glacier's stopped by:

Most geologic effects of glaciation take place over thousands of years, but not all of them. A Jökulhlaup is a sudden, devastating flood that happens when a glacial lake is suddenly released. The term comes from Iceland, a place that has both volcanoes and glaciers in abundance, and originally referred to a sudden release of water by volcanic eruption. Meltwater builds up behind some portions of glaciers, sometimes filling in to create lakes. Or, the glacier might advance across a river, damming the river and creating a lake that way. When a volcano erupts under a glacier, it might destroy an ice dam or release enormous volumes of meltwater by heat alone. Other ice dams are destroyed by erosion, or because the lake behind them gets so high that the dam floats. Geologists use Jökulhlaup to describe all these catastrophic glacial floods, not just volcanic ones.

Near the borders of the states of Washington, Idaho and Oregonsits Glacial Lake Missoula. Geologists have determined that during past ice ages, ice dams created a lake holding over 500 cubic miles of water [source: Alt]. That's about half the volume of Lake Michigan [source: Great Lakes Information Network]. The ice dam eventually floated and broke apart, releasing all that water at once. The resulting deluge was probably one of the most massive floods in Earth's history. It happened several times, as the glacier crept back across the river and formed a new dam, only to break apart once the water level behind it got high enough.

On the next page, find out if you're using the term "ice age" correctly -- and whether global warming is really affecting glaciers.­