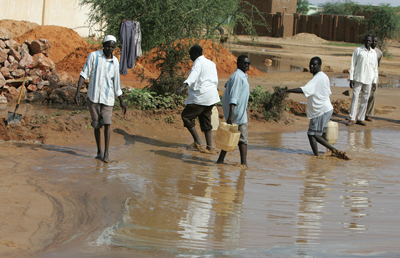 In 1995, World Bank Vice President Ismail Serageldin said, "the wars of the next century will be fought over water" [source: Village Voice]. The last war fought over water was 4,500 years ago in Mesopotamia , but other water conflicts have broken out since [source: Leslie]. The bloody conflict in Darfur, Sudan, that began in 2003 and killed as many as 400,000 Africans, started, in part, over access to a diminishing water supply [source: The Guardian].

The Darfur conflict began locally and grew to encompass a region. In other regions, water may also strain relations between neighboring countries. Water is spread across geographic boundaries, which makes it difficult to determine ownership. Because nations may share a common water supply, animosity can grow over access to it, especially where it is perceived by one group that another is demanding more from the supply.

This phenomenon is not limited to regions where many countries are situated near one another, but in regions of the United States as well. In October 2007, a 20-year-old dispute over water rights -- which some call a water war -- between the states of Alabama, Florida and Georgia flared up. When the available water that supplies Atlanta's 4.5 million residents, as well as parts of Alabama and Florida, began to diminish due to a severe drought, tensions flared over the rights to the water supply. While the states' National Guards didn't confront each other, the governors engaged in a publicity war, exchanging words instead of bullets.

Water is inequitably dispersed on a global level. While developing nations scramble to provide their populations with water, they usually end up paying more for it, since they must take greater measures to get it. Developed countries can afford infrastructure that can deliver water cheaply and effectively to residents. This makes water seem cheaper and less valuable to the people who live there. While it takes about 12 gallons per day to sustain a human (this figure takes into account all uses for water, like drinking, sanitation and food production), the average American uses about 158 gallons [source: U.S. News and World Report].

This illuminates a global divide over water. This divide could also fuel conflict and animosity between the water-haves and the water-have-nots in the future. While access to safe water is being seen increasingly as a human right, water itself is becoming a luxury item. For example, a diet rich in meat is associated with wealth, since meat is more expensive than grain. And while it takes about 1,000 tons of water to grow one ton of grain, it takes 15 times that amount of water to grow one ton of beef [source: Leslie]. As water grows in value, how will developed nations be perceived by those nations with little or no access to water?

It's clear that as water becomes increasingly valuable, the risk of future conflicts over water supply increases. But can we overcome our own future? Is it inevitable that plague, famine and war due to a lack of water will define 21st-century history? Read the next page to find out about possible hope for the future.