If the Polar Ice Caps Melt 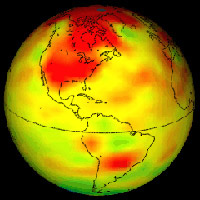 Are the polar ice caps in danger of melting and causing the oceans to rise? This could happen, but no one knows when it might happen.

The Earth's main ice-covered landmass is Antarctica at the South Pole, with about 90 percent of the world's ice (and 70 percent of its fresh water). Antarctica is covered with ice an average of 2,133 meters (7,000 feet) thick. If all of the Antarctic ice melted, sea levels around the world would rise about 61 meters (200 feet). But the average temperature in Antarctica is -37°C, so the ice there is in no danger of melting. In fact, in most parts of the continent it never gets above freezing.

At the other end of the world, the North Pole, the ice is not nearly as thick as at the South Pole. The ice floats on the Arctic Ocean. If it melted, sea levels would not be affected.

There is a significant amount of ice covering Greenland, which would add another 7 meters (20 feet) to the oceans if it melted. Because Greenland is closer to the equator than Antarctica, the temperatures there are higher, so the ice is more likely to melt. Scientists from the Universities of London and Edinburgh say that ice loss in Antarctica and Greenland together contribute approximately 12 percent of the rise in sea levels [Source: Science Daily].