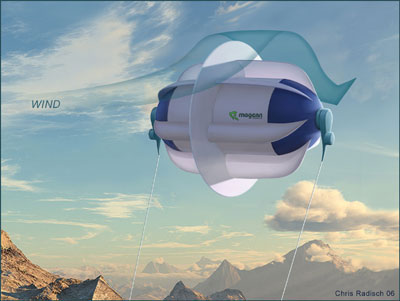 The MARS turbine captures the higher speed winds found at altitudes of up to 1,000 feet and converts them into electricity using a generator.
Magenn Power

Or, tune in to  on Discovery Channel for more about the future of conservation.

In a few years, you may see scores of giant blimps floating overhead. But it won't be because Goodyear is having a hoedown -- those blimps are actually wind turbines. They're not your typical turbine, though. These extremely mobile energy generators, christened with the acronym MARS, will float high in the air at altitudes ranging from 600 to 1,000 feet (183 to 305 meters). The MARS acronym -- not to be confused with the red planet -- stands for Magenn Air Rotor System, and its concept is actually pretty down to Earth. The turbine's only relationship to outer space is the fact that it slightly resembles an oddly shaped UFO.

Why a floating­ ­turbine, you ask? Magenn originally designed the turbine for locations where setting up a traditional wind farm isn't realistic: places with a harsh climate like an Antarc­tic research station or disaster areas that need quick access to power for emergency and medical equipment.

But although the inventor of the MARS turbine designed it mainly for remote areas and didn't intend for it to compete with conventional turbines in the current wind turbine market, it's difficult not to compare the two. Despite the improvements in conventional wind turbines over the years, they've encountered their share of opposition and have had a rough time catching on. While the current 100,000 megawatts of electricity generated worldwide by wind is impressive, it only accounts for a small percentage of the world's total electricity production.

With the introduction of new wind-energy turbine designs like the one used in the MARS, however, that statistic could soon change. Although the basic concept behind it is the same as that behind traditional wind turbines -- the conversion of one form of energy (wind energy) into another (electricity) -- the MARS turbine possesses several differences that could make it appeal to a wider market. One of those differences is that it doesn't rely on a large tower to hold it up. It's simply attached to the ground by a strong tensioning cable called the tether. But the differences don't end there.

­Find out how this turbine, which the CEO of Magenn characterized as a floating white sausage with paddleboat wheels, compares to conventional turbines on the next page. 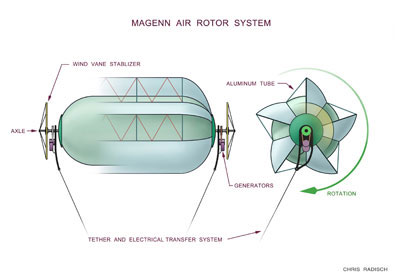 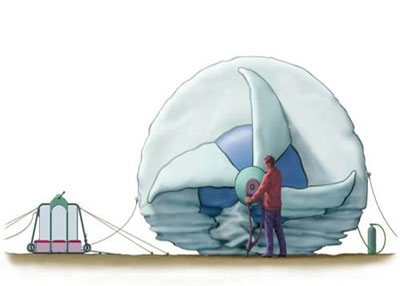 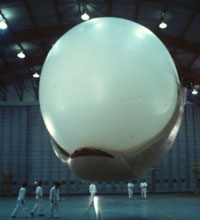