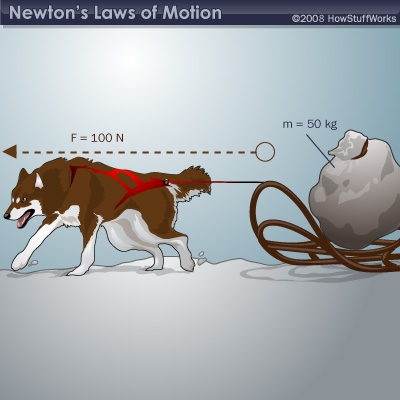 If you want to calculate the acceleration, first you need to modify the force equation to get a = F/m. When you plug in the numbers for force (100 N) and mass (50 kg), you find that the acceleration is 2 m/s2.
HowStuffWorks

You may be surprised to learn that Newton wasn't the genius behind the law of inertia. But Newton himself wrote that he was able to see so far only because he stood on "the shoulders of Giants." And see far he did. Although the law of inertia identified forces as the actions required to stop or start motion, it didn't quantify those forces. Newton's second law supplied the missing link by relating force to acceleration. This is what it said:

where the delta symbols signify change. Because acceleration is defined as the instantaneous change in velocity in an instant of time (Δv/Δt), the equation is often rewritten as:

The equation form of Newton's second law allows us to specify a unit of measurement for force. Because the standard unit of mass is the kilogram (kg) and the standard unit of acceleration is meters per second squared (m/s2), the unit for force must be a product of the two -- (kg)(m/s2). This is a little awkward, so scientists decided to use a Newton as the official unit of force. One Newton, or N, is equivalent to 1 kilogram-meter per second squared. There are 4.448 N in 1 pound.

So what can you do with Newton's second law? As it turns out, F = ma lets you quantify motion of every variety. Let's say, for example, you want to calculate the acceleration of the dog sled shown below.

Now let's say that the mass of the sled stays at 50 kilograms and that another dog is added to the team. If we assume the second dog pulls with the same force as the first (100 N), the total force would be 200 N and the acceleration would be 4 m/s2.

Finally, let's imagine that a second dog team is attached to the sled so that it can pull in the opposite direction.

This is important because Newton's second law is concerned with net forces. We could rewrite the law to say: When a net force acts on an object, the object accelerates in the direction of the net force. Now imagine that one of the dogs on the left breaks free and runs away. Suddenly, the force pulling to the right is larger than the force pulling to the left, so the sled accelerates to the right.

What's not so obvious in our examples is that the sled is also applying a force on the dogs. In other words, all forces act in pairs. This is Newton's third law -- and the topic of the next section.