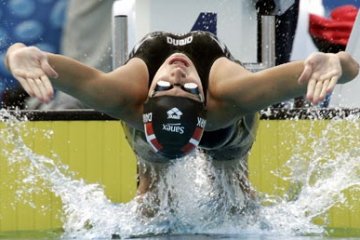 That's one heck of a force!
TIMOTHY A. CLARY/AFP/Getty Images

Newton's third law is probably the most familiar. Everyone knows that every action has an equal and opposite reaction, right? Unfortunately, this statement lacks some necessary detail. This is a better way to say it:

Many people have trouble visualizing this law because it's not as intuitive. In fact, the best way to discuss the law of force pairs is by presenting examples. Let's start by considering a swimmer facing the wall of a pool. If she places her feet on the wall and pushes hard, what happens? She shoots backward, away from the wall.

Clearly, the swimmer is applying a force to the wall, but her motion indicates that a force is being applied to her, too. This force comes from the wall, and it's equal in magnitude and opposite in direction.

Next, think about a book lying on a table. What forces are acting on it? One big force is Earth's gravity. In fact, the book's weight is a measurement of Earth's gravitational attraction. So, if we say the book weighs 10 N, what we're really saying is that Earth is applying a force of 10 N on the book. The force is directed straight down, toward the center of the planet. Despite this force, the book remains motionless, which can only mean one thing: There must be another force, equal to 10 N, pushing upward. That force is coming from the table.

If you're catching on to Newton's third law, you should have noticed another force pair described in the paragraph above. Earth is applying a force on the book, so the book must be applying a force on Earth. Is that possible? Yes, it is, but the book is so small that it cannot appreciably accelerate something as large as a planet.

You see something similar, although on a much smaller scale, when a baseball bat strikes a ball. There's no doubt the bat applies a force to the ball: It accelerates rapidly after being struck. But the ball must also be applying a force to the bat. The mass of the ball, however, is small compared to the mass of the bat, which includes the batter attached to the end of it. Still, if you've ever seen a wooden baseball bat break into pieces as it strikes a ball, then you've seen firsthand evidence of the ball's force.

These examples don't show a practical application of Newton's third law. Is there a way to put force pairs to good use? Jet propulsion is one application. Used by animals such as squid and octopi, as well as by certain airplanes and rockets, jet propulsion involves forcing a substance through an opening at high speed. In squid and octopi, the substance is seawater, which is sucked in through the mantle and ejected through a siphon. Because the animal exerts a force on the water jet, the water jet exerts a force on the animal, causing it to move. A similar principle is at work in turbine-equipped jet planes and rockets in space.

Speaking of outer space, Newton's other laws apply there, too. By using his laws to analyze the motion of planets in space, Newton was able to come up with a universal law of gravitation. We'll explore this further in the next section.