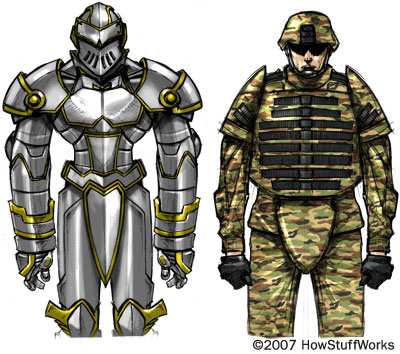 Ancient body armor has a lot in common with modern body armor. Both provide protection against weapons but are heavy, bulky and inflexible.

­The basic idea behind body armor hasn't changed very much in the past few thous­and years. First, armor stops weapons or projectiles from reaching a person's body. Second, it diffuses the weapon's energy so that the final impact causes less damage. While it's not effective in every situation, armor can generally help protect people from serious injury or death, especially against the right weaponry.

Over the years, people have had to develop stronger and more advanced armor to protect against increasingly sophisticated weapons. However, in spite of these improvements, modern body armor still has some of the same shortcomings as ancient forms of armor. Whether it's made from metal plates or layers of fabric, armor is often heavy and bulky. Many types are rigid, so they're impractical for use on arms, legs and necks. For this reason, medieval suits of plate armor had gaps and joints to allow people to move around, and the body armor used today often protects only the head and torso.

­One of the newest types of body armor, though, is both flexible and lightweight. Oddly enough, this improvement comes from the addition of liquid to existing armor materials. While it's not entirely ready for combat, laboratory research suggests that liquid body armor has the potential to be a good replacement for or supplement to bulkier vests. Eventually, soldiers, police officers and others may be able to use it to protect their arms and legs.

The two primary types of liquid body armor currently in development both start with a foundation of DuPont Kevlar, commonly used in bulletproof vests. When a bullet or a piece of shrapnel hits a Kevlar vest, the layers of material spread the impact over a large surface area. The bullet also stretches the Kevlar fibers, expending energy and slowing down in the process. The concept is similar to what happens when a car air bag spreads the impact and slows the movement of a person's torso during a collision.

Although Kevlar is a fabric, Kevlar armor does not move or drape the way clothing does. It takes between 20 and 40 layers of Kevlar to stop a bullet, and this stack of layers is relatively stiff. It's also heavy -- a vest alone often weighs more than 10 pounds (4.5 kilograms), even without ceramic inserts for additional protection.

Two different fluids, however, can allow Kevlar armor to use far fewer layers, making it lighter and more flexible. Both of them have one thing in common -- they react strongly in response to a stimulus. Next, we'll look at what these liquids are made of and why they react the way they do. 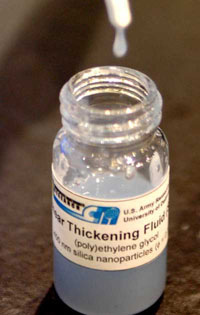 The term "liquid body armor" can be a little misleading. For some people, it brings to mind the idea of moving fluid sandwiched between two layers of solid material. However, both types of liquid armor in development work without a visible liquid layer. Instead, they use Kevlar that has been soaked in one of two fluids.

The first is a shear-thickening fluid (STF), which behaves like a solid when it encounters mechanical stress or shear. In other words, it moves like a liquid until an object strikes or agitates it forcefully. Then, it hardens in a few milliseconds. This is the opposite of a shear-thinning fluid, like paint, which becomes thinner when it is agitated or shaken.

You can see what shear-thickening fluid looks like by examining a solution of nearly equal parts of cornstarch and water. If you stir it slowly, the substance moves like a liquid. But if you hit it, its surface abruptly solidifies. You can also shape it into a ball, but when you stop applying pressure, the ball falls apart.

Here's how the process works. The fluid is a colloid, made of tiny particles suspended in a liquid. The particles repel each other slightly, so they float easily throughout the liquid without clumping together or settling to the bottom. But the energy of a sudden impact overwhelms the repulsive forces between the particles -- they stick together, forming masses called hydroclusters. When the energy from the impact dissipates, the particles begin to repel one another again. The hydroclusters fall apart, and the apparently solid substance reverts to a liquid.

Before impact, the particles in shear-thickening fluid are in a state of equilibrium. After impact, they clump together, forming solid structures.

To make liquid body armor using shear-thickening fluid, researchers first dilute the fluid in ethanol. They saturate the Kevlar with the diluted fluid and place it in an oven to evaporate the ethanol. The STF then permeates the Kevlar, and the Kevlar strands hold the particle-filled fluid in place. When an object strikes or stabs the Kevlar, the fluid immediately hardens, making the Kevlar stronger. The hardening process happens in mere milliseconds, and the armor becomes flexible again afterward.

In laboratory tests, STF-treated Kevlar is as flexible as plain, or neat, Kevlar. The difference is that it's stronger, so armor using STF requires fewer layers of material. Four layers of STF-treated Kevlar can dissipate the same amount of energy as 14 layers of neat Kevlar. In addition, STF-treated fibers don't stretch as far on impact as ordinary fibers, meaning that bullets don't penetrate as deeply into the armor or a person's tissue underneath. The researchers theorize that this is because it takes more energy for the bullet to stretch the STF-treated fibers.

Research on STF-based liquid body armor is ongoing at the U.S. Army Research Laboratory and the University of Delaware. Researchers at MIT, on the other hand, are examining a different fluid for use in body armor. We'll look at their research next.

The Slow Blade Penetrates the Shield

STF-based body armor has parallels in the world of science fiction. In the universe of Frank Herbert's "Dune," a device called a Holtzman generator can produce a protective shield. Only objects moving at slow speeds may penetrate this shield. Similarly, slowly-moving objects will sink through shear-thickening fluid without causing it to harden. In low-speed, or quasistatic, knife tests, a knife can penetrate both neat Kevlar and STF-treated Kevlar. However, the STF-treated Kevlar sustains slightly less damage, possibly because the fluid causes the fibers to stick together. 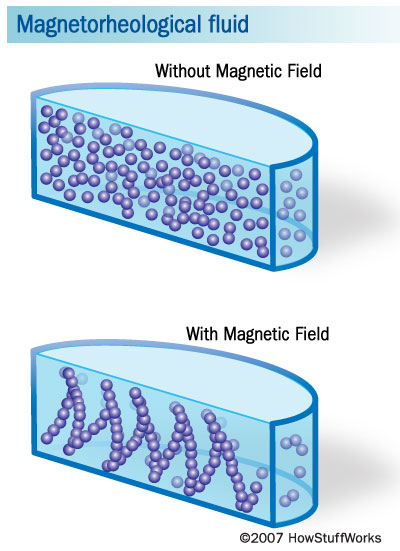 When exposed to a magnetic field, the particles in magnetorheological fluid align along the field lines.

The other fluid that can reinforce Kevlar armor is magnetorheological (MR) fluid. MR fluids are oils that are filled with iron particles. Often, surfactants surround the particles to protect them and help keep them suspended within the fluid. Typically, the iron particles comprise between 20 and 40 percent of the fluid's volume.

The particles are tiny, measuring between 3 and 10 microns. However, they have a powerful effect on the fluid's consistency. When exposed to a magnetic field, the particles line up, thickening the fluid dramatically. The term "magnetorheological" comes from this effect. Rheology is a branch of mechanics that focuses on the relationship between force and the way a material changes shape. The force of magnetism can change both the shape and the viscosity of MR fluids.

The hardening process takes around twenty thousandths of a second. The effect can vary dramatically depending on the composition of the fluid and the size, shape and strength of the magnetic field. For example, MIT researchers started with spherical iron particles, which can slip past one another, even in the presence of the magnetic field. This limits how hard the armor can become, so researchers are studying other particle shapes that may be more effective.

As with STF, you can see what MR fluids look like using ordinary items. Iron filings mixed with oil create a good representation. When no magnetic field is present, the fluid moves easily. But the influence of a magnet can cause the fluid to become thicker or to take a shape other than that of its container. Sometimes, the difference is very visually dramatic, with the fluid forming distinctive peaks, troughs and other shapes. Artists have even used magnets and MR fluids or similar ferrofluids to create works of art.

With the right combination of density, particle shape and field strength, MR fluid can change from a liquid to a very thick solid. As with shear-thickening fluid, this change could dramatically increase the strength of a piece of armor. The trick is activating the fluid's change of state. Since magnets large enough to affect an entire suit would be heavy and impractical to carry around, researchers propose creating tiny circuits running throughout the armor.

Magnetorheological fluid before and after exposure to a magnetic field

Without current flowing through the wires, the armor would remain soft and flexible. But at the flip of the switch, electrons would begin to move through the circuits, creating a magnetic field in the process. This field would cause the armor to stiffen and harden instantly. Flipping the switch back to the off position would stop the current, and the armor would become flexible again.

In addition to making stronger, lighter, more flexible armor, fabrics treated with shear-thickening and magnetorheological fluids could have other uses as well. For example, such materials could create bomb blankets that are easy to fold and carry and can still protect bystanders from explosion and shrapnel. Treated jump boots could harden on impact or when activated, protecting paratroopers' boots. Prison guards' uniforms could make extensive use of liquid armor technology, especially since the weapons guards are most likely to encounter are blunt objects and homemade blades.

However, the technologies do have a few pros and cons. Here's a rundown:

Neither type of armor is quite ready for battlefield use. STF-treated Kevlar armor could be available by the end of 2007 [Source: Business Week]. MR fluid may require another five to 10 years of development before it can consistently stop bullets. [Source: Science Central]. Check out the links on the next page to learn more about military technology, body armor and related topics.

Other Uses for MR Fluids

MR fluids have numerous uses besides strengthening body armor. Their ability to change from liquids to semisolids almost instantly makes them useful for dampening impacts and vibrations in items like:

Since it can instantly and reversibly change shape, it could also be used to create scrolling Braille displays or reconfigurable molds.

How Bulletproof Are Bulletproof Vests?
Ridiculous History: The U.S. Navy Used Dirigibles as Flying Aircraft Carriers
How to Survive a Nuclear Attack