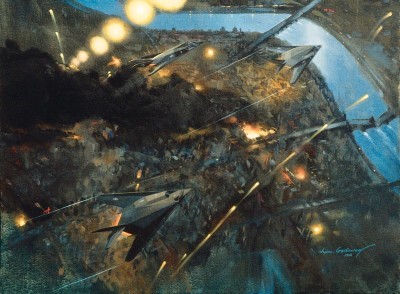 As with any radically new weapons system, the unavoidably expensive Lockheed F-117A Nighthawk Stealth Fighter inspired doubt as to its capabilities. Those doubts were erased during the Persian Gulf War, when Stealth fighters slipped through Iraqi radar and attacked their targets with impunity. See more military jets pictures.
m

The famous Lockheed F-117A Nighthawk Stealth Fighter was that rarest commodity in the American military arsenal -- a well-kept secret. Lockheed began development of the Stealth Fighter at its secret Skunk Works facility in 1976, and by 1977 had subscale-technology demonstrators flying under the code name Have Blue at the famous Area 51 proving grounds at Groom Dry Lake, Nevada.

Led by the late, great Ben Rich, engineers at the Skunk Works developed a formula for stealth by constructing an aircraft with flat surfaces placed at angles so that incoming radar beams are deflected away. (Kelly Johnson, the founding father of the Skunk Works, had stayed on as a consultant, and in his view, Ben's ideas simply would not work. Ben was delighted to be able to prove, for once, that his old boss was wrong.)

This faceted-plate construction technique, combined with the use of radar-absorbent materials and careful attention to the suppression of infrared signals, reduced the radar signature of the supersecret Stealth Fighter to the size of a marble. It was, quite literally, invisible to radar.

The first Lockheed F-117A Nighthawk Stealth Fighter prototype flew on June 18, 1981, piloted by Harold Farley, Jr., but the existence of the aircraft was not acknowledged by the Air Force until 1988. The need for secrecy stemmed from the unique nature of the F-117A's mission. It was to fly alone against the heaviest enemy defenses, and destroy key command and control centers, radars, and other vital targets with precision-guided munitions.

The term "stealth fighter" is really a misnomer, for the F-117A is purely an attack aircraft, and does not have the armament or the maneuverability to engage in dogfighting. The nature of the mission and the characteristics of the aircraft demanded extremely skilled, well-trained pilots, and competition for the chance to fly the Nighthawk was intense.

The aircraft was introduced into combat on December 19, 1989, in Operation Just Cause, the U.S. attack on Panama to capture President Manuel Noriega. When Iraqi leader Saddam Hussein invaded Kuwait, the F-117As were called into action. Twenty-one Night­hawks flew from their Tonopah, Nevada, base to Langley Air Force Base, Virginia. From there, 18 of the aircraft made the 15-hour nonstop flight to King Khalid Air Base in Saudi Arabia, refueling seven times en route.

Keep reading to learn more about the Lockheed F-117A Nighthawk Stealth Fighter, and to check out specifications for this airplane.

Aviation Stealth and the Birth of Stealth Fighters

There have been attempts at aviation stealth since the First World War, when the Germans attempted to cover some aircraft with Cellon, a clear, cellophanelike material. It did not work -- the clear panels reflected the sun even better than painted ones. Other attempts at stealth included mufflers for engines, camouflage, and even an array of lights mounted on the wings and fuselage of a World War II Consolidated B-24, intended to make it "invisible" against a light background.

But radar, which tracks aircraft by reflected radio waves, became the biggest threat. The answer, ironically, was found by Lockheed's Denys Overholser, who read an obscure paper by a Soviet scientist, Pyotr Ufimtsev. Overholser and Bill Schroeder used the paper as a basis for creating a computer program "ECHO I" which showed how "faceting" would give an airplane stealth characteristics. The Stealth Fighter was born.

On January 17, 1991, the Nighthawks wrote a new chapter in air warfare with their attack on Iraq. On the first day of the war, Lockheed F-117A Nighthawk Stealth Fighters flew less than three percent of the total sorties, but took out more than 30 percent of the targets. In 1,271 combat sorties during the 43 days of the air offensive, the Nighthawks made 1,669 pinpoint hits on key targets.

The public was utterly fascinated by the release of films taken during the attacks, which show the laser-guided bombs striking windows and airshafts of buildings with an uncanny precision.

Curiously enough, the United States Air Force had not been at all certain that the Lockheed F-117A Nighthawk Stealth Fighter would function as planned. The Iraqi defenses were so heavy, and there was so much barrage fire, it seemed inevitable that sheer chance would see a Nighthawk brought down. Fortunately, this was not the case, and the first loss did not occur until the 1999 war in Bosnia, when a lack of electronic countermeasures (ECM) coverage (and the possibility of a security lapse) caused an F-117A to be shot down.

The United States Air Force purchased only 59 F-117As, and losses have whittled that number down to about 53 in the active inventory. Yet, in every potential combat situation, there is an immediate demand for their services. Consequently, the Air Force reserves them for use against targets of the highest value.

Early in the Nighthawk's career, rumors abounded that it was difficult to fly. However, the multiple computer systems on board compensate for its lack of stability, making it a pleasant aircraft to fly. Its pilots are very loyal to it.