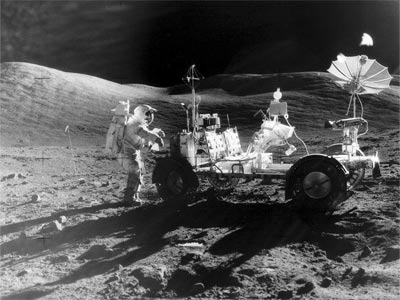 In December 1972, Apollo astronauts Eugene Cernan and Harrison Schmitt spent about 75 hours exploring the moon's Taurus-Littrow valley. The two were the last humans to walk or ride on the moon -- aided in their explorations by a lunar roving vehicle.
Photo courtesy ­NASA

­It's the early 1970s and an Apollo astronaut is hanging out on the moon with some colleagues. Clad in the requisite bulky space suit, he needs to explore a crater several miles away, so he heads for the rover. He steps up 14 inches (35 centimeters) into the lawn-chair type seat in the center compartment of the aluminum chassis. The rover is about 10 feet long (3 meters), 6 feet wide (nearly 2 meters) and almost 4 feet (1 meter) high. It's roughly the size of a modern Volkswagen Beetle.

His partner joins him in the other seat as the first astronaut surveys the LRV. The communications equipment (high-gain antenna for pictures and data, low-gain antenna for voice and TV camera), power (two 36-volt batteries) and navigation equipment are located in the front compartment. In the center compartment are the two seats, the display unit and the hand controller for driving the LRV. The storage compartment behind them holds scientific and rock sampling gear (tools, bags). Below them the rover's four wheels are each made of two aluminum frames (an inner and outer frame), while the tires themselves are made of galvanized piano wire mesh with titanium chevron treads.

The designated driver looks down at the display console in the center of the LRV crew compartment to get his bearings. The navigation display sits on top with a computer display, a sun compass, speed display (0-12 mph, 0-20 kph), reset buttons and a pitch-angle meter that tracks the slope that the rover's on. On the bottom are the power switches that distribute power from the two batteries, the battery power monitors and the switches that control the electric steering motors and drive motors.

Before the astronaut can start driving, he has to complete the startup checklist, the first step of which is sighting on the sun with the sun compass. Once he gives that reading to the people at mission control, they send back data to program the navigation computer. This reading gives the LRV navigation computer a reference point near the lunar module, the Apollo landing craft that serves as their home base while on the moon. While in operation, the computer keeps track of the rover's bearing with respect to the lunar module by using a gyroscope and by measuring distance (range) through the number of wheel revolutions. A compass on the display shows lunar north.

Once the checklist is completed, it's time to head out.