Driving on the Moon with the Apollo LRV 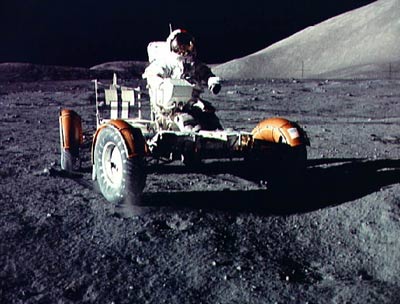 ­The Apollo LRV didn't come with a steering wheel per se. It did, however, have a hand controller located just behind the display console on an armrest, which coordinated the steering, drive motors and brakes. The controller was located in the center of the crew compartment so that either astronaut could drive, although the commander usually did the honors. It also came with a T-handle for easy operation with the suit's bulky gloves.

Each wheel of the LRV could operate independently by an electric motor and steer independently of the other wheels so that the LRV could turn even if one steering linkage failed. Similarly, each wheel also had independent brakes. For NASA, redundancy has always been a priority. In addition, this setup allowed a tight turning radius of 10 feet (3 meters).

The T-handle could pivot left, right, front or back and move forward or backward. It also came with a button that could lock the controller for use in a forward direction, as well as a ring to release the parking brake. The movements of the hand controller guided the LRV like this:

Let's return to our two astronauts journeying outward to explore the crater. The LRV's suspension minimizes the bumps of the uneven terrain, but they're strapped in with ­toeholds, handholds and seat belts anyway. Although the LRV is desi­gned go up a slope as steep as 25 degrees or to travel as far as 40 miles (67 kilometers), they won't travel more than 6 miles (10 kilometers) from the lunar module. If the rover failed, they could still walk back to the module before their life support systems ran out.

And unanticipated problems, mechanical and otherwise, did occur. For example, on the Apollo 17 mission, Commander Gene Cernan broke off a piece of the rover's fender when a hammer in his space suit ­pocket caught it as he passed by. The fender blocked the moon dust kicked up by the rover's mesh wheels. If the astronauts hadn't repaired the fender, the wheels would have covered the astronauts and equipment in moon dust -- a hazard to both the men and the equipment. They fashioned a new fender from a laminated map and duct tape, which allowed them to continue using the vehicle. Pretty ingenious.

What happens once the LRV reaches its destination?