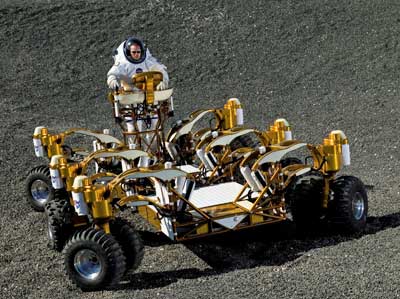 ­While the Apollo LRV was used mainly to extend the exploration capabilities of the astronauts during a short stay on the moon, NASA is planning on building a lunar base for extended missions -- months to years versus Apollo's days. Longer missions require vehicles that are capable of doing heavy work, like construction, digging and hauling loads. To this end, NASA has designed a prototype lunar truck.

The lunar truck is a mobile platform made for traveling on the moon. Like its Apollo forebears, it's not pressurized, so astronauts will have to wear space suits while operating it. The truck is designed to move cargo, and NASA is exploring the possibility of adding other equipment to it, like a backhoe or crane. The truck is intended to carry as many as four astronauts.

The astronaut driver stands at the driver's perch. He or she can look around in any direction to move the truck. The truck has six wheels, and each wheel has two tires. The wheels can be steered independently in a rotation of 360 degrees. This setup gives the truck enormous maneuverability. It can go in any direction: forward, backward, sideways or any combination thereof.

Two electric motors power the truck with a two-speed transmission. The truck can lower to ground level and raise back up with a lifting force of 4,000 pounds (17,800 newtons). It can obtain a maximum speed of 15 mph or 25 kph when unloaded.

The prototype lunar truck was developed at NASA's Johnson Space Center in Houston and tested at the center's lunar simulation area at Moses Lake, Wash., where the sand dunes can simulate the lunar environment.

Just like a student driver needs to learn how to operate a car, astronauts must learn to drive rovers as part of the training for any mission where a rover will be involved. For the commanders and lunar module pilots of Apollo flights 15-17, that meant training with a rover in the Arizona desert for months. Because the new rovers are prototypes rather than production models, engineering teams (which include some astronauts) are doing the driving and evaluating at various test sites. Once NASA establishes lunar missions with designated crews, those astronauts will begin rover training, but that won't be for a while.