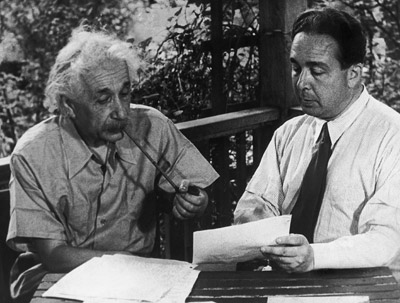 Albert Einstein and Leo Szilard in 1946, reenacting the signing of their letter to President Roosevelt warning him that Germany may be building an atomic bomb.
March Of Time/Time Life Pictures/Getty Images

News about nuclear fission traveled quickly from Europe to America, and by 1939, many leading physics labs in the United States, including Ernest Lawrence's at the Berkeley campus of the University of California, were testing the possibilities of generating power with uranium.

Although this was an exciting time for physics, it was also a tense and uncertain one. World War II was well under way by now, as Hitler had risen to power in Nazi Germany and invaded Poland on Sept. 1, 1939. Many feared the Germans were fast at work on a nuclear weapon, one they would undoubtedly use against their enemies during wartime. Prominent physicists such as Leo Szilard, Edward Teller and Eugene Wigner, all Europeans who fled to America to avoid the war, felt it necessary to warn the U.S. government about the dangers of Germany developing nuclear arms first.

Albert Einstein and Szilard were concerned enough to write a letter to U.S. President Franklin D. Roosevelt, describing the German threat and the possibility of constructing powerful weapons with uranium. After some discussion with economist Alexander Sachs, Roosevelt decided it was necessary to begin research on nuclear power, and he set up the Advisory Committee on Uranium, with Lyman J. Briggs as its head.

The next two years were fraught with uncertainty, because no one was sure how much uranium was needed, how much bomb construction would cost or how much time the U.S. had to complete a functional weapon. On top of this, research was still inconclusive regarding the extraction of uranium-235 from uranium.

Vannevar Bush on the cover of the April 3, 1944, issue of Time Magazine.
Time Life Pictures/Getty Images

Things sped up with the help of Vannevar Bush, the president of the Carnegie Foundation, who was appointed chairman of the National Defense Research Committee by Roosevelt in the summer of 1940. Bush folded the Uranium Committee into this new government committee, giving scientists better funding and security. One more step on June 28, 1941, put Bush as director of the Office of Scientific Research and Development. The National Defense Research Committee became an advisory body to the Office of Scientific Research and Development, and the Uranium Committee was renamed the Office of Scientific Research and Development Section on Uranium, along with the codenam­e S-1. Find all the naming-switching confusing? So did anyone else trying to figure out what the White House was doing with the bomb program.

Later in July 1941, Bush received the boost he needed to get the project officially off of the ground. The MAUD Committee, the British's own version of a nuclear weapon plan, released the similarly titled MAUD Report. Although England's resources were stretched thin because of their involvement in World War II, their theoretical contributions to the bomb's design were invaluable, and the report ensured many who read it that a nuclear bomb and the enrichment of uranium-235 would definitely be possible. Bush set several research groups, mostly universities like Berkeley and Columbia, into motion with much more funding than before -- Lawrence alone received $400,000 for his work with electromagnetism. Secrecy was still the top priority despite the extra money, and scientists picked strange locations in order to conceal their efforts -- many people today are shocked to hear that physicists Enrico Fermi and Arthur Compton used space beneath the stands at Stagg Field, the racket courts at the University of Chicago, to conduct the first nuclear chain reaction in 1942.

Soon it was time for the Army to step in. To learn more about the organization of the Manhattan Project, read the next page.