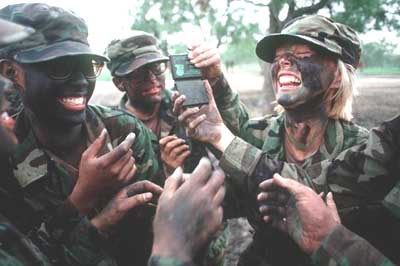 In war, the function of camouflage is very simple: It is used to hide yourself and your equipment from the enemy. People have been using camouflage in some form or another from the beginning of human civilization. In fact, the basic idea of camouflage predates humans entirely. It comes from the natural adaptations that let animals blend in with their environment.

In the past 100 years, camouflage has played a crucial role in most countries' military operations. In this article, we'll look at the basic idea of military camouflage to understand how it helps soldiers defeat the enemy. We'll also find o­ut about modern camouflage and see how it has kept up with technological advancements in enemy detection.

Learn More on the Discovery Channel

Scientists are researching ways to make a soldier blend in to the battlefield by making them virtually invisible to the eye. Learn about the camouflage of the future in this Discovery Channel video. 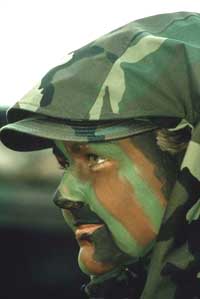 The most basic camouflage is the sort worn by soldiers on the battlefield. Conventional camouflage clothing has two basic elements that help conceal a person: color and pattern.

Camouflage material is colored with dull hues that match the predominant colors of the surrounding environment. In jungle warfare, camouflage is typically green and brown, to match the forest foliage and dirt. In the desert, military forces use a range of tan colors. Camouflage for snowy climates is colored with whites and grays. To complete the concealment, soldiers paint their face with colors matching the camouflage material.

Camouflage material may have a single color, or it may have several similarly colored patches mixed together. The reason for using this sort of pattern is that it is visually disruptive. The meandering lines of the mottled camouflage pattern help hide the contour -- the outline -- of the body. When you look at a piece of mottled camouflage in a matching environment, your brain naturally "connects" the lines of the colored blotches with the lines of the trees, ground, leaves and shadows. This affects the way you perceive and recognize the person or object wearing that camouflage.

Human perception naturally categorizes things in the world as separate objects. When you look at a scene, you are gathering an immense amount of information with your eyes and other senses. In order for your conscious mind to make any sense out of this information, your brain has to break it down into component parts. When your brain perceives a long, vertical area of brown with green blotches connected to it, you perceive a tree. And when your brain perceives many, many individual trees in a given area, you perceive a forest.

A U.S. Marine in full camouflage gear: The colors match his surroundings, and the disruptive pattern conceals the contours of his body.
Photo courtesy United States Military

One thing your brain is always looking for when analyzing visual information is continuity. Imagine a stack of 12 blocks. If all of the blocks are colored red, you perceive the pile as one unit. But if the bottom six blocks are red and the top six blocks are blue, you may perceive the pile as two separate units: a stack of blue blocks on top of a stack of red blocks. And if you were to randomly mix blue blocks and red blocks together, you wouldn't group them into colored units at all. We tend to recognize something as a separate object if it has one continuous color, so a person is much more likely to stand out when wearing a single color than when wearing a jumble of colors. In the jungle, you perceive the jumble of colors in camouflage material as many small things that are component parts of the surrounding foliage.

In this way, mottled camouflage helps people go undetected even though they are in plain sight. Once you have spotted a camouflaged person, he stands out, and it seems odd that you didn't see him before. This is because your brain is now processing the visual scene differently -- it is looking for a single person.

Camouflage is not only used to hide people, of course. In the next section we'll see how military forces use camouflage on a larger scale, to hide forts and heavy equipment. 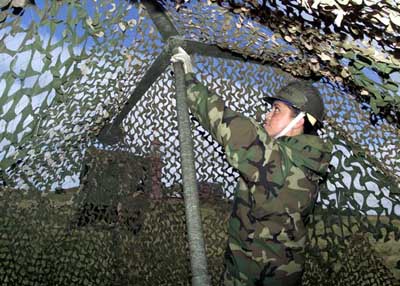 In the last section, we saw that camouflage material helps soldiers blend in with their environment so the enemy won't detect them. But in modern warfare, hiding individual soldiers is often of secondary importance. Since World War I, opposing forces have used aircraft to seek each other out from the air. In order to hide equipment and fortifications from these "eyes in the sky," ground forces have to use camouflage on a larger scale.

Since World War II, almost all U.S. military equipment has been colored in dull green and brown colors so it blends in with natural foliage. Additionally, soldiers almost always carry camouflaged netting and chicken wire, which they can throw over military vehicles to conceal them better. Soldiers are also trained to improvise camouflage by gathering natural foliage from an area and covering tanks and other vehicles. Using these means, Allied and Axis forces in World War II camouflaged tanks, jeeps, planes, guns, manufacturing plants and entire army bases.

A Republic of Korea Army soldier camouflages his tank with tree branches as part of a battle-simulation exercise.
Photo courtesy United States Military

Camouflaging warships has proved more difficult because they are always floating on a wide background that has a uniform color. In World War I, military forces realized that there was no way to make ships "blend in" with the surroundings, but that there might be a way to make them less susceptible to attack. The dazzle camouflage design, developed in 1917, accomplishes this by obscuring the course of the ship (its direction of travel). The dazzle design resembles a cubist painting, with many colored geometric shapes jumbled together. Like the mottling in camouflage wear, this design makes it difficult to figure out the actual outlines of the ship and distinguish the starboard side from the port side. If submarine or ship crews don't know which way a ship is moving, it is a lot harder for them to accurately aim a torpedo.

Militaries also make extensive use of decoys as a means of camouflage. Unlike traditional camouflage, the purpose of decoys is not to conceal forces and equipment, but to divert the enemy from their locations. In the Battle of Britain, Allied forces set up more than 500 false cities, bases, airfields and shipyards, consisting of flimsy structures that resembled actual buildings and military equipment. These remarkable dummies, built in remote, uninhabited areas, significantly diminished the damage to actual cities and fortifications by causing the Axis forces to waste their time and resources.

HMS Belfast, a British ship that served in World War II, is now a floating museum on the River Thames in London. The ship is painted with a variation on the classic "dazzle" camouflage scheme.
Photo courtesy United States Military

This sort of camouflage is still used today, to good effect. Many modern equipment decoys have advanced pneumatic systems, which give them the movement you would expect to see in real equipment. Traditional camouflage is also used today, but it is not always effective. As we'll see in the next section, modern technology makes it much easier for your enemy to find you, no matter how well you blend in with the colors of your surroundings. 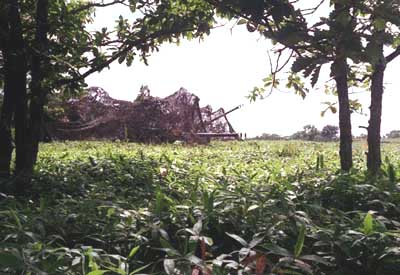 As the technology of camouflage has advanced over the past hundred years, so has the technology of seeing through camouflage. These days, military forces can use thermal imaging to "see" the heat emitted by a person or piece of equipment. Additionally, they may use radar, image enhancement, satellite photography and sophisticated listening devices to detect the enemy.

To hide from this scanning technology, military forces have to think past visual concealment. In modern warfare, camouflage for equipment and soldiers may be made of material that keeps excess heat from escaping, so their thermal "signature" does not show in thermal imaging. In ships, the major heat source is the engine exhaust. To reduce this thermal emission, some modern ships cool the exhaust by passing it through sea water before it is expelled. Some tanks have a similar cooling system to mask the heat of their exhaust.

To counteract image enhancement -- the amplification of tiny amounts of light (including low-frequency infrared light) -- some armies are developing sophisticated smoke screens. A heavy cloud of smoke blocks the path of light, imparting a sort of invisibility to whatever is behind the smoke screen. According to one report, the United States is working on a smoke screen that would be impenetrable to night vision technologies while still allowing advanced U.S. thermal imagers to function correctly. On a larger scale, the British shipbuilder Vosper Thorneycroft has developed a system that uses a series of water nozzles to produce a constant fog all around a ship, obscuring it from view.

U.S. Air Force airmen concealing a shelter in Operation Desert Shield: The airmen's uniforms, as well as the camouflage net, are designed to blend in with the desert environment.
Photo courtesy United States Military

Stealth technology allows militaries to hide equipment from radar. In stealth equipment, the surface of a vehicle is made up of many flat planes, interconnected at odd angles. These planes serve to deflect the radar radio waves so they don't bounce straight back to the radar station, but instead bounce off at an angle and travel in another direction. Equipment may also be coated with a layer of "radar-absorbent" material. When a radio wave hits an object, the electrons in that object are excited to some degree, so the wave has passed on some of its energy. In a good conductor, such as a metal radio antenna, the electrons move very easily, so the radio wave doesn't lose much energy in getting those electrons excited. Radar-absorbent material, on the other hand, is a very poor conductor, so there is greater resistance to moving the electrons. Because of this resistance, the radio wave loses more energy, which is emitted as heat. This reduces the overall reflected radio signal.

Decoy technology has also advanced in response to modern detection systems. The U.S. Army and other military forces have developed easily-transported, inflatable dummies that not only resemble tanks and other equipment visually, but also replicate the thermal or radar signature of that equipment. To radar and other long-range scanners, these dummies are virtually indistinguishable from real equipment. A less precise decoy strategy is to flood an area with all sorts of objects that show up on radar, thermal-imaging and listening devices, making it harder for the enemy to focus in on any particular piece of equipment.

As detection and spy equipment continues to advance, military engineers will have to come up with more sophisticated camouflage technologies. One interesting idea that is already in the works is "smart camouflage" -- outer coverings that alter themselves based on computer analysis of changing surroundings. No matter how advanced camouflage gets, the basic strategy will still be the approach used by the first human hunters: Figure out how your enemy sees you, and then mask all of the elements that make you stand out.

For more information on military camouflage and related topics, check out the links on the next page.