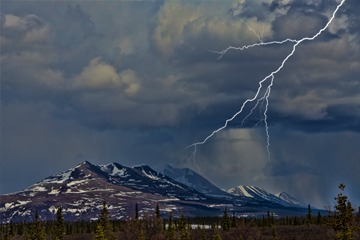 Thunder in the winter could signal that a cold front is on its way.
Mark Newman/Getty Images

It would be nice to know without a doubt when snow was coming. But as schoolchildren can tell you, what they really need is a way to make snow appear. On a school night. Before that stupid report is due. All these old wives' tales about predicting snow are fine and good, but what kids really need is a way to guarantee a snow day.

Instead, we're stuck with pretty vague — or perhaps suspiciously too specific — tales of when we might be able to enjoy a good blanketing. Consider the old adage that thunder in the winter brings snow within seven days. It's pretty on the nose for weather lore. Come to think of it, it's a little too pointed for any weather prediction. When was the last time you heard a forecaster guarantee a big weather activity a week out? As they say about these things — you can't really accurately predict them.

But that doesn't mean there isn't actually a little grain of truth in the phrase. Winter thunder does tell us a bit more about how the weather might behave than, say, a groundhog that sniffs its way out of a burrow once a year. Thunder, on the other hand, does in fact signal a certain type of weather front, which might give us a glimpse of the cold stuff.

The general idea is that thunder develops in atmospheres conducive to — surprise! — thunderstorms. You're not going to get a ton of the rumbly stuff on, say, a clear day with no chance of rain. However, cold air and low-pressure systems from the north, displacing warm air and high pressure in the south, form an unstable atmosphere that can create terrific conditions for thunderstorms. Now, that means if you're hearing thunder in the winter, it could signal that a cold front is moving in. A moist weather system making its way through next could conceivably bring snow [source: Majoros]. A safe prediction you could make after hearing thunder in winter? Some cold weather is on its way.

Naturally, the "seven days" thing is a bit of a stretch. While a cold front could signal some snow, there's certainly no predicting when (or if) another wet weather system could arrive. What we do know (according to a 2006 study) is that if you do get "thundersnow," you're likely to get dumped on quite heavily [source: Crowe et al.]. So if it does start coming down and thundering, be prepared for a snow day.

If Rainbows Are Circular, Why Do We Only See Arches?
10 Myths About Rainbows
Tiny Louisiana Community Is Rapidly Vanishing Due to Rising Seas