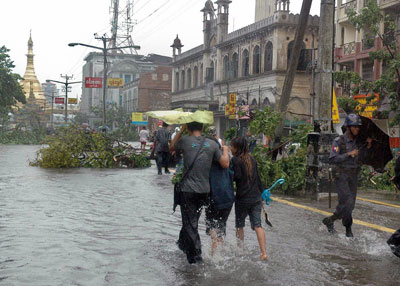 People walk in a flooded street in Myanmar's largest city, Yangon, on May 3, 2008, after a hurricane (although it's called a cyclone there).
AFP/Getty Images

Over the course of millennia, hurricanes have cemented their reputation as destroyers. Many people even frame them as the embodiment of nature's power or acts of divine wrath. The word "hurricane" itself actually derives from "Hurakan," a destructive Mayan god. No matter how you choose to sum up or personify these powerful acts of nature, the damage they inflict stems from several different aspects of the storm.

Hurricanes deliver massive downpours of rain. A particularly large storm can dump dozens of inches of rain in just a day or two, much of it inland. That amount of rain can create flooding, potentially devastating large areas in the path of the hurricane's fierce center.

In addition, high sustained winds within the storm can cause widespread structural damage to both man-made and natural structures. These winds can roll over vehicles, collapse walls and blow over trees. The prevailing winds of a hurricane push a wall of water, called a storm surge, in front of it. If the storm surge happens to coincide with high tide, it causes beach erosion and significant inland flooding.

Tornadoes: one of the bonus effects of hurricanes.
Paul & Lindamarie Ambrose/Getty Images

The hurricane itself is often just the beginning. The storm's winds often spawn tornadoes, which are smaller, more intense cyclonic storms that cause additional damage. You can read more about them in How Tornadoes Work.

The extent of hurricane damage doesn't just depend on the strength of the storm, but also the way it makes contact with the land. In many cases, the storm merely grazes the coastline, sparing the shores its full power. Hurricane damage also greatly depends on whether the left or right side of a hurricane strikes a given area. The right side of a hurricane packs more punch because the wind speed and the hurricane's speed of motion complement one another there. On the left side, the hurricane's speed of motion subtracts from the wind speed.

­This combination of winds, rain and flooding can level a coastal town and cause significant damage to cities far from the coast. In 1996, Hurricane Fran swept 150 miles (241 km) inland to hit Raleigh, N.C. Tens of thousands of homes were damaged or destroyed, millions of trees fell, power was out for weeks in some areas and the total damage was measured in the billions of dollars.