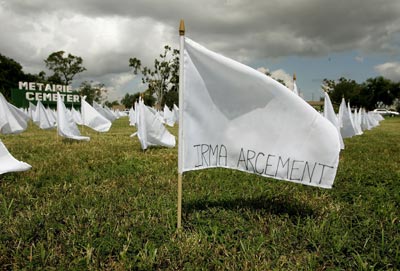 Naming a hurricane isn't all that difficult, but naming the dead in the aftermath of a hurricane obviously is. Pictured is one of 1,464 white flags bearing the names of people who died in Louisiana as a result of Hurricane Katrina.
Getty Images

While personifying a massive, destructive force certainly makes for a jazzier headline, the practice of naming hurricanes originated with meteorologists, not media outlets. Often more than one tropical storm is active at the same time, so what better way to tell them apart than by naming them?

For several hundred years, residents of the West Indies often named hurricanes after the Catholic saint's day on which the storm made landfall. If a storm arrived on the anniversary of a previous storm, a number was assigned. For example, Hurricane San Felipe struck Puerto Rico on Sept. 13, 1876. Another storm struck Puerto Rico on the same day in 1928, so this storm was named Hurricane San Felipe the Second.

During World War II, weather officials only gave hurricanes masculine names. These names closely followed radio code names for letters of the alphabet. This system, like the West Indian saints system, drew from a limited naming pool. In the early 1950s, weather services began naming storms alphabetically and with only feminine names. By the late 1970s, this practice was replaced with the equal opportunity system of alternating masculine and feminine names. The World Meteorological Organization (WMO) continues this practice to this day.

The first hurricane of the season is given a name starting with the letter A, the second with the letter B and so on. As the storms affect varying portions of the globe, the naming lists draw from different cultures and nationalities.

Hurricanes in the Pacific Ocean are assigned a different set of names than Atlantic storms. For example, the first hurricane of the 2001 hurricane season was a Pacific Ocean storm near Acapulco, Mexico, named Adolf. The first Atlantic storm of the 2001 season was named Allison. A predetermined list of names for potential future storms is available from the National Hurricane Center.

If a hurricane inflicts significant damage, a country affected by the storm can request that the name of the hurricane be "retired" by the WMO. A retired name can't be reissued to a tropical storm for at least 10 years. This helps to avoid public confusion and to simplify both historical and legal record keeping.