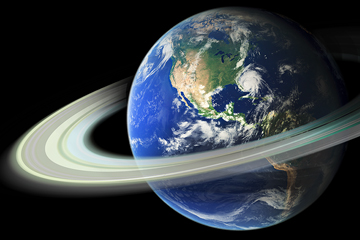 Earth may have had rings billions of years ago.
© 2015 HowStuffWorks, a division of Infospace LLC

Despite its waxing and waning, the moon seems ever-present, a familiar orb gleaming down on Earth from the night sky. But what if one evening you looked skyward and saw not a moon, but a ring much like the ones that loop around Saturn?

Scientists believe Earth had a ring once, although that was several billion years ago. They surmise the ring appeared early in the formation of Earth's moon. According to the generally accepted giant impactor hypothesis, a planet named Theia collided with Earth in the distant past. This collision caused an explosion of matter to rocket into Earth's orbit [source: Jenvey]. That matter formed a ring which eventually coalesced into the moon we see today.

If Earth had rings, cities like New York far from the equator would have an impressive angled view.
© 2015 HowStuffWorks, a division of Infospace LLC

If this ring of debris had existed within the Roche limit, Earth might still have a ring instead of a moon. The Roche limit is a term named for the French mathematician Edouard Roche, who in 1848 figured out that a planet's gravitational pull on a moon is unequal -- a planet exerts a greater gravitational force on the side of the moon closest to the planet and a lesser gravitational force on the side facing away. This means that if a moon, ring or other object has an orbital trajectory too close to a planet, the unequal gravitational pull could tear it apart. Essentially, the Roche limit is the minimum distance an object can be from a planet and still hold itself together by its own gravity [source: Miller].

If Earth's original ring were still in place, or if by some other collision new rings had formed in Earth's orbit, the view of these rings from Earth would vary. It would all depend on your latitude and which direction you were facing. The rings would mostly likely form parallel to Earth's equator and be visible in the sky from an east to west orientation. Near the equator, the rings would be like thin slices of light that erupted from distant Earth horizons and stretched into the sky as far as the eye could see.

Cities near the equator, like Jakarta, Indonesia, would see a ring around Earth more as a straight line across the sky.
© 2015 HowStuffWorks, a division of Infospace LLC

The farther away you were from the equator, the more the appearance of the rings would change. The rings would become markedly wider and more visible and would, from some vantage points, appear so close to the horizon that you could reach out and touch them.

Just as the moon currently does, the rings would reflect sunlight back to Earth at night and appear to glow in the night sky. The rings would probably reflect so much sunlight that the planet would never fully plunge into darkness, but remain in a gentle twilight even in the depth of night. During the day, the rings could potentially cause light levels on Earth to skyrocket [source: Atkinson]. And just think of all the new sayings we'd have to come up with. We'd no longer shoot for the moon, but aim for our rings instead.