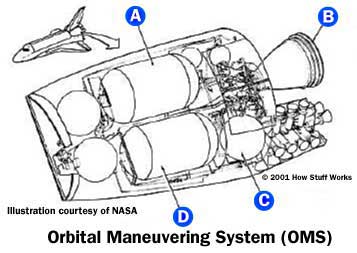 ­The two orbital maneuvering systems' (OMS) engines are located in pods o­n the aft section of the orbiter, one on either side of the tail. These engines place the shuttle into final orbit, change the shuttle's position from one orbit to another, and slow the shuttle down for re-entry.

The OMS engines burn monomethyl hydrazine fuel (CH3NHNH2) and nitrogen tetroxide oxidizer (N2O4). Interestingly, when these two substances come in contact, they ignite and burn automatically (i.e., no spark required) in the absence of oxygen. The fuel and oxidizer are kept in separate tanks, each pressurized by helium. The helium pushes the fluids through the fuel lines (i.e., no mechanical pump required). In each fuel line, there are two spring-loaded solenoid valves that close the lines. Pressurized nitrogen gas, from a small tank located near the engine, opens the valves and allows the fuel and oxidizer to flow into the combustion chamber of the engine. When the engines shut off, the nitrogen goes from the valves into the fuel lines momentarily to flush the lines of any remaining fuel and oxidizer; this purge of the line prevents any unwanted explosions. During a single flight, there is enough nitrogen to open the valves and purge the lines 10 times!

Now let's put these pieces together to lift off!

Profile of shuttle launch and ascent into orbit

You are now in outer space and ready to continue your mission.

Now, let's look at where and how you will be living while you are in space.