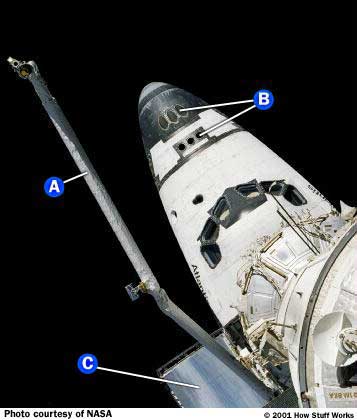 To change the direction that the orbiter is pointed (attitude), you must use the reaction control system (RCS) located on the nose and OMS pods of the aft fuselage.

The RCS has 14 jets that can move the orbiter along each axis of rotation (pitch, roll, yaw). The RCS thrusters burn monomethyl hydrazine fuel and nitrogen tetroxide oxidizer just like the OMS engines described previously. Attitude changes are required for deploying satellites or for pointing (mapping instruments, telescopes) at the Earth or stars.

To change orbits (e.g., rendezvous, docking maneuvers), you must fire the OMS engines. As described above, these engines change the velocity of the orbiter to place it in a higher or lower orbit (see How Satellites Work for details on orbits).

You must be able to talk with flight controllers on the ground daily for the routine operation of the mission. In addition, you must be able to communicate with each other inside the orbiter or its payload modules and when conducting spacewalks outside.

The orbiter has two systems for communicating with the ground:

The orbiter has several intercom plug-in audio terminal units located throughout the crew compartment. You will wear a personal communications control with a headset. The communications control is battery-powered and can be switched from intercom to transmit functions. You can either push to talk and release to listen or have a continuously open communication line. To talk with spacewalkers, the system uses a UHF frequency, which is picked up in the astronaut's space suit.

The orbiter also has a series of internal and external video cameras to see inside and outside.

The orbiter must be able to know precisely where it is in space, where other objects are and how to change orbit. To know where it is and how fast it is moving, the orbiter uses global positioning systems (GPS). To know which way it is pointing (attitude), the orbiter has several gyroscopes. All of this information is fed into the flight computers for rendezvous and docking maneuvers, which are controlled in the aft station of the flight deck.

All of the on-board systems of the orbiter require electrical power. Three fuel cells make electricity; they are located in the mid fuselage under the payload bay. These fuel cells combine oxygen and hydrogen from pressurized tanks in the mid fuselage to make electricity and water. Like a power grid on Earth, the orbiter has a distribution system to supply electrical power to various instrument bays and areas of the ship. The water is used by the crew and for cooling.

The orbiter has five on-board computers that handle data processing and control critical flight systems. The computers monitor equipment and talk to each other and vote to settle arguments. Computers control critical adjustments especially during launch and landing:

­Pilots essentially fly the computers, which fly the shuttle. To make this easier, the shuttles have a Multifunctional Electronic Display Subsystem (MEDS), which is a new, full color, flat, 11-panel display system. The MEDS, also known as the "glass cockpit", provides graphic portrayals of key light indicators (attitude, altitude, speed). The MEDS panels are easy to read and make it easier for shuttle pilots to interact with the orbiter.

Now let's look at the kind of work you'll be doing during your shuttle mission.