Work Aboard the Shuttle 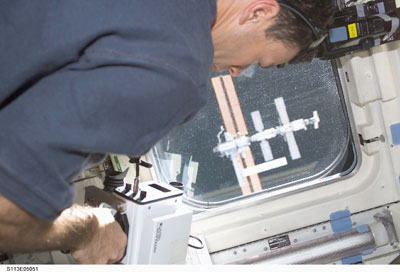 The shuttle was designed to deploy and retrieve satellites as well as deliver payloads to Earth orbit. To do this, the shuttle uses the Remote Manipulator System (RMS). The RMS was built by Canada and is a long arm with an elbow and wrist joint. You can control the RMS from the aft flight deck. The RMS can grab payloads (satellites) from the cargo bay and deploy them, or grab on to payloads and place them into the bay.

In the past, the shuttle was used for delivering satellites and conducting experiments in space. Within the mid-deck, there are racks of experiments to be conducted during each mission. When more space was needed, the mission used the Spacelab module, which was built by the European Space Agency (ESA). It fit into the cargo bay and was accessed by a tunnel from the mid-deck of the crew compartment. It provided a "shirt-sleeve" environment in which you could work. The Spacelab was lost along with Columbia in 2003. Now, most experiments will be conducted aboard the International Space Station (ESA is building a new science module called Columbus for the ISS).

The shuttle's major role is building and resupplying the International Space Station. The shuttle delivers components built on Earth. Astronauts use the RMS to remove components from the cargo bay and to help attach them to existing modules in space station.

Astronauts install a truss, which was delivered to the space station by Endeavour (STS113).
Photo courtesy NASA

You will spend most of your time on the shuttle doing work to accomplish the mission objectives. Besides work, you must exercise frequently on the treadmill to counteract the loss of bone and muscle mass associated with weightlessness. You will also eat at the galley and sleep in your bunk-style sleeping quarters. You will have a toilet and personal hygiene facilities for use. You may have to perform spacewalks to accomplish the mission objectives. This will involve getting into a space suit and going through depressurization procedures in the airlock.

When your mission objectives have been accomplished, it will be time to return to Earth. Let's look at this process in the next section.