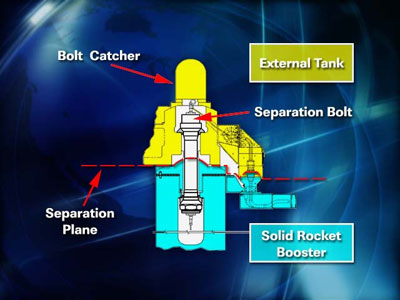 A bolt catcher (above) was designed to prevent the explosive bolts on the SRBs (below) from damaging the ET or the orbiter.
Photo courtesy NASA

­Expl­osive bolts separate the SRBs from the external tank when the SRBs burn out in flight. Engineers assessed that fragments of the bolts could also damage the shuttle. They designed a bolt catcher to prevent the bolts from damaging the ET or hitting the orbiter.

To detect falling debris and possible damage to the shuttle, NASA has done the following:

The RMS/OBSS will allow astronauts to inspect the underside and leading edge of the wings for damage.
Photo courtesy NASA

Finally, engineers and technicians have installed 66 tiny accelerometers and 22 temperature sensors in the leading edge of both wings on the orbiter. The devices will detect the impact of any debris hitting the orbiter's wings.

The entire purpose of the imaging and wing sensors is to detect possible damage from falling debris. Engineers and administrators can analyze these images and make recommendations to the crew during the mission.

NASA also formulated ideas on how to repair damaged shuttles while in flight, including:

These ideas were tested aboard the shuttle Discovery in June 2005.