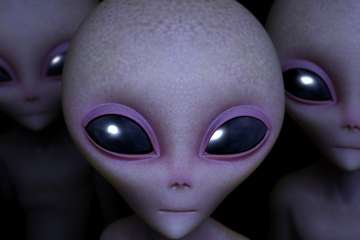 Artist's conception of an alien.
iStock/Thinkstock

In 1989, a man named Robert Lazar shocked the world when he went on television claiming to have been part of a military operation that worked on alien technology. Lazar said that the government possessed at least nine alien spacecraft at a base called S-4, which is not far from Groom Lake. The facility even had posters showing a UFO levitating several feet above the ground with the caption "They're Here!" This was the first time an "insider" had "blown the whistle."

Lazar said EG&G hired him to help reverse engineer the technology in the alien craft for use in U.S. military vehicles and power production. He'd discovered a rusty, heavy substance he called "Element 115" that powered the alien spacecraft.

Lazar's statements inspired an explosion of interest in UFOs and Area 51. But skeptics investigated as many of Lazar's statements as they could, and most appeared to be false. For example, Lazar said he held master's degrees from CalTech and MIT, but there's no evidence he ever attended either university. Lazar replied that the government was actively trying to erase his existence to discredit him. Also, both the Air Force and the Los Alamos National Laboratories denied he had ever worked for them. In 2013, a writer tried to contact him for the upcoming 25th anniversary of his allegations and was told, "Mr. Lazar no longer involves himself in matters related to the topic of UFOs" [source: Rojas].

One popular claim among Lazar's believers is that much of our current technology is the result of using reverse engineering on alien spacecraft. Everything from radios to superconductors falls into this category. They argue that people on their own couldn't possibly have developed these technologies so rapidly without an alien model. Some claim that pilots at Area 51 are using alien technology against aliens themselves, shooting them down so that other military crews can scavenge the parts.