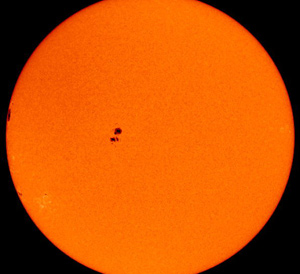 These sunspots may seem small, but most are actually larger than the planet Earth.
NASA/Getty Images

Sunspots occur because the sun isn't a hunk of rock like the Earth and the inner planets, but a ball of continually circulating hot gases that doesn't move in one piece. The interior and the exterior of the sun rotate separately; the outside rotates more quickly at the equator than at the solar north and south poles. (Specifically, a point on the equator takes 25 Earth days to go around, while a point near one of the poles takes 36 days to complete its rotation.) Over time, all that messy and uneven movement twists and distorts the sun's main magnetic field in the same way that your bed sheets get wrinkled and bunched up when you toss and turn in your sleep. The bunched up spots -- actually twists in the magnetic field lines -- have so much magnetic power that they push back the hot gases beneath them and prevent the heat from rising directly to the surface. In other words, they become sunspots. Because sunspots are cooler than the rest of the sun's surface, they look darker. At the same time, the hot gases blocked by these sunspots flow into the areas around them, making those areas even hotter and brighter than normal. This contrast makes sunspots stand out even more.

To an observer on Earth, sunspots appear to move because sun's surface itself is moving (though not in one piece, as we discussed). It takes the sun much longer to complete its rotation than the Earth does, but because the sun is 100 times larger than our planet, a sunspot looks like it's moving four times faster than a point on Earth.

The average sunspot is as big as the Earth, but some are really, really huge. Scientists measure them by comparing them to the sun's visible area (that is, the half of the sun that we can see from Earth). The biggest recorded sunspot in the last century occurred in 1947. It covered 6,132 millionths of the sun's visible area -- roughly 18 times the Earth's surface area [source: European Space Agency].

In the next section, we'll analyze the sunspot cycle and what causes it.