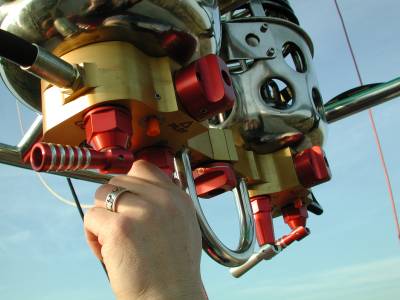 To blast the burner, the pilot opens the propane valve.

Piloting a balloon takes skill, but the controls are actually very simple. To lift the balloon, the pilot moves a control that opens up the propane valve. This lever works just like the knobs on a gas grill or stove: As you turn it, the flow of gas increases, so the flame grows in size. The pilot can increase the vertical speed by blasting a larger flame to heat the air more rapidly.

Additionally, many hot air balloons have a control that opens a second propane valve. This valve sends propane through a hose that bypasses the heating coils. This lets the pilot burn liquid propane, instead of propane in gas form. Burning liquid propane produces a less efficient, weaker flame, but is much quieter than burning gas. Pilots often use this second valve over livestock farms, to keep from scaring the animals.

Hot air balloons also have a cord to open the parachute valve at the top of the envelope. When the pilot pulls the attached cord, some hot air can escape from the envelope, decreasing the inner air temperature. This causes the balloon to slow its ascent. If the pilot keeps the valve open long enough, the balloon will sink.

The parachute valve, from the inside of the balloon. A Kevlar cord runs from the valve at the top of the balloon, down to the basket, through the center of the envelope.

Essentially, these are the only controls -- heat to make the balloon rise and venting to make it sink. This raises an interesting question: If pilots can only move hot air balloons up and down, how do they get the balloon from place to place? As it turns out, pilots can maneuver horizontally by changing their vertical position, because wind blows in different directions at different altitudes. To move in a particular direction, a pilot ascends and descends to the appropriate level, and rides with the wind. Since wind speed generally increases as you get higher in the atmosphere, pilots can also control horizontal speed by changing altitude.

To maneuver the balloon horizontally, the pilot ascends or descends in altitude, catching different wind currents.

Of course, even the most experienced pilot doesn't have complete control over the balloon's flight path. Usually, wind conditions give the pilot very few options. Consequently, you can't really pilot a hot air balloon along an exact course. And it's very rare that you would be able to pilot the balloon back to your starting point. So, unlike flying an airplane, hot air balloon piloting is largely improvised, moment to moment. For this reason, some members of a hot air balloon crew have to stay on the ground, following the balloon by car to see where it lands. Then, they can be there to collect the passengers and equipment.