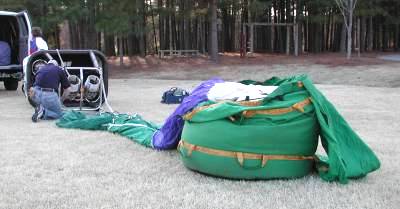 A lot of the work in hot air ballooning comes at the beginning and the end of the flight, when the crew inflates and deflates the balloon. For the spectator, this is a much more spectacular show than the actual balloon flight.

Once the envelope is laid out, the crew begins inflating it, using a powerful fan at the base of the envelope.

When there is enough air in the balloon, the crew blasts the burner flame into the envelope mouth. This heats the air, building pressure until the balloon inflates all the way and starts to lift off the ground.

Amazingly, this entire process only takes 10 or 15 minutes. The landing process, combined with deflating and re-packing the balloon envelope, takes a while longer.

When the pilot is ready to land, he or she discusses possible landing sites with the ground crew (via an onboard radio). They need to find a wide open space, where there are no power lines and plenty of room to lay out the balloon. As soon as the balloon is in the air, the pilot is constantly looking for suitable landing sites, in case there is an emergency.

Once the balloon envelope is down on the ground, the crew begins pushing the air out. When the balloon is flattened, the crew packs it into a stuff sack. This whole process is a lot like packing up a giant sleeping bag.

Special thanks to CargoLifter for helping us with this article.