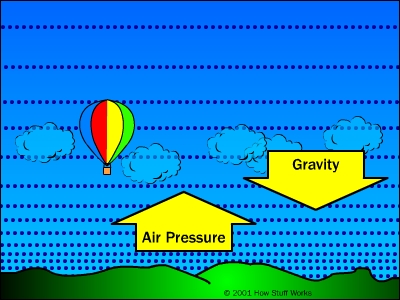 All air particles in the atmosphere are drawn by the downward force of gravity. But the pressure in the air creates an upward force working opposite gravity's pull. Air density builds to whatever level balances the force of gravity, because at this point gravity isn't strong enough to pull down a greater number of particles.

This pressure level is highest right at the surface of the Earth because the air at this level is supporting the weight of all the air above it -- more weight above means a greater downward gravitational force. As you move up through levels of the atmosphere, the air has less air mass above it, and so the balancing pressure decreases. This is why pressure drops as you rise in altitude.

For buoyancy to push something up in the air, the thing has to be lighter than an equal volume of the air around it. The most obvious thing that is lighter than air is nothing at all. A vacuum can have volume but does not have mass, and so, it would seem, a balloon with a vacuum inside should be lifted by the buoyancy of the air around it. This doesn't work, however, because of the force of surrounding air pressure. Air pressure doesn't crush an inflated balloon, because the air inside the balloon pushes out with the same force as the outside air pushing in. A vacuum, on the other hand, doesn't have any outward pressure, since it has no particles bouncing against anything. Without equal pressure balancing it out, the outside air pressure will easily crush the balloon. And any container strong enough to hold up to the air pressure at the earth's surface will be much too heavy to be lifted by the buoyant force.

There are fewer air particles per unit of volume inside the balloon, but because those particles are moving faster, the inside and outside air pressure are the same.

All of this is assuming that the air in the balloon and the air outside the balloon exist under exactly the same conditions. If we change the conditions of the air inside the balloon, we can decrease density, while keeping air pressure the same. As we saw in the last section, the force of air pressure on an object depends on how often air particles collide with that object, as well as the force of each collision. We saw that we can increase overall pressure in two ways:

So, to lower air density in a balloon without losing air pressure, you simply need to increase the speed of the air particles. You can do this very easily by heating the air. The air particles absorb the heat energy and become more excited. This makes them move faster, which means they collide with a surface more often, and with greater force.

For this reason, hot air exerts greater air pressure per particle than cold air, so you don't need as many air particles to build to the same pressure level. So a hot air balloon rises because it is filled with hot, less dense air and is surrounded by colder, more dense air.