Browse the article How Skywriting Works 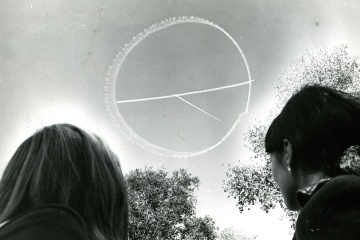 Most of a skywritten peace symbol floats in the sky over Boston Common during a peace rally held on Oct. 15, 1969.
Joseph Runci/The Boston Globe via Getty Images

Skywriters like their secrets. The few pilots who can write a legible message in the sky are known to keep the finer details to themselves. It's by tradition: Previous generations of skywriters faced more piloting competition, so they closely guarded their methods.

Or at least that's how Steve Oliver tells it. Oliver and his wife, Suzanne Asbury-Oliver, are some of the most experienced skywriters on the planet. They are among the remaining handful of pros trained in what they refer to as the "lost art." And it is an art: Writing a legible message on paper requires a steady hand; writing one in the sky requires a steady everything.

A skywriter executes aerial maneuvers 2 miles (3 kilometers) above the ground, looping, climbing and flipping like a roller coaster while releasing perfectly timed streams of thick, white smoke [source: Olivers Flying Circus]. It's an expensive process -- prices start at $5,000 and go way up from there – so businesses are the usual clients [source: LaFrance]. Some people spring for it, though, typically for big events. Marriage proposals are popular. So are anniversary wishes: Ellen DeGeneres and Portia de Rossi do it every year since they got married in 2008 [source: Domi, EllenTV].

But the most common messages are advertisements. The draw is obvious: In ideal weather conditions, skywritten messages can be seen for more than 2,800 square miles (7,300 square kilometers), a range unmatched by billboards [source: Olivers Flying Circus]. And skywriting demands attention: It's hard not to watch intently as a message unfolds above you, wondering what it's going to say. Skywriting might as well have been invented for ads.

And yet it wasn't. As with so many marvels, skywriting first served the military.

Skywriting dates back to World War I, when England's Royal Air Force (RAF) used it in military operations. Sources report multiple applications, including forming a cloak around ships and ground troops to block enemy reconnaissance, and writing messages to relay critical information to troops out of range of standard communications [sources: Popular Mechanics, Hartill].

After the war, a couple of RAF pilots resurrected the old military "smoke casting" machinery with the aim of putting it to good civilian use: advertising. In May 1922, Capt. Cyril Turner maneuvered a specially equipped scout plane to form the words "Daily Mail," the name of a British newspaper, over Epsom Downs during the Derby [source: Smithsonian National Air and Space Museum]. And the skywritten ad was born.

Later that year, Turner went to America to demonstrate the new ad format, writing "HELLO USA" over New York City [source: Hartill]. People were intrigued. The following day, he wrote "CALL VANDERBILT 7200," the phone number of the hotel he was staying at. Over the next two-and-half hours, the hotel's operators fielded 47,000 calls [source: New York Times]. Proof-of-concept accomplished.

By the 1930s, skywriting was the biggest thing in advertising. Companies like Chrysler, Ford, Lucky Strike and Sunoco all got in the game. But it was the Pepsi-Cola Company, then a fledgling drink maker, that really ran with it [source: Kelly]. Skywriting was expensive, but not as expensive as radio advertising, and Pepsi maximized its ad bucks by heading to the skies [source: Olivers Flying Circus].

But the rise of television in the 1950s put a damper on skywriting's ad appeal. TV allowed companies to put their ads inside customers' homes, as well as match ads to target audiences [source: Hartill]. Plus, TV ads could air on rainy days [source: LaFrance].

Since the early '50s, skywriting has mostly been a novelty – a fun throwback to "simpler times." Very few pilots can do it. According to Cristina Domi of TheSkyWriters.com, there are only four professional skywriters in the world. It could be lack of interest; it's tough to make a living at it [source: LaFrance]. Or it could be that skywriting, it turns out, is really, really hard.

Pepsi renewed its skywriting campaign in the 1970s. In 1973, the company purchased one of the planes that had written all those Pepsi ads in the '30s and '40s. It became the Pepsi Skywriter, which many people got to know in Pepsi's famous 1979 "Marry Me Sue" commercial. Since its retirement in 2000, the red, white and blue biplane has been on display in the National Air and Space Museum's Udvar-Hazy Center in Virginia [source: Smithsonian National Air and Space Museum].

The Lost Art of Skywriting

There are actually two kinds of skywriting: traditional and digital. The kind the Olivers do is traditional, or "longhand," and few people can do it. There's no official training program or certifying body; it's just something that's learned. Suzanne Asbury-Oliver learned from Jack Strayer, who was skywriting for Pepsi in 1980 when she answered the company's want ad for a second pilot [source: Smithsonian National Air and Space Museum]. Asbury-Oliver taught her husband [source: Spitznagel].

To write legibly on the sky, pilots have to maneuver quickly and accurately while moving at 150 mph (240 kph), pressed into the seat by G-forces [source: Hartill]. It takes 17 maneuvers in 10 minutes to write the five letters in "PEPSI" [source: Olivers Flying Circus]. And all the while, they have to, you know, fly a plane.

The writing process begins at around 10,000 feet (3,000 meters), where the air is calmer and cooler. Cooler air exerts more pressure, so it helps hold the smoke together. Since ground-based viewers are on the other side of the writing, skywriters need to draw the letters backward. (Add that to the skill set.)

It's kind of like drawing a picture in the dark. The pilots really can't see much. It's hard to make out the smoke against the sky, and the only orientation points are on the ground, which may or may not be in sight at any given time [sources: Asbury-Oliver, Hartill]. So they feel their way. They might count to 15 to get to the right length for an F's upright [source: Hartill]. What counts most is precision. "Either your headings, rates of turn and timing are exactly correct or it doesn't work," explains Asbury-Oliver. So the more curves and lines in a character, the greater the chance of messing it up. "Writing in Chinese," she says, "is tough."

Nature counts, too. "You don't write on a cloudy day," says Asbury-Oliver. "The 'smoke' is the same color as clouds, so you can't see it." Windy days are out, too. The message will dissolve before people can read it.

In ideal conditions, though – cool, humid, windless and clear – messages can hang around for 20 minutes or more, visible from up to 30 miles (50 kilometers) away [source: Library of Congress]. The messages average about eight characters long, with each letter about 1 mile (1.6 kilometers) tall [sources: [https://science.howstuffworks.com/transport/flight/modern/skywriting5.htm]Olivers Flying Circus, Sky-Writing.com]. The actual maximum a pilot can draw, though, depends on his or her plane.

The smoke begins as a paraffin-based mineral oil, sometimes called paraffin oil or liquid paraffin. It's the same stuff that's used in air shows. According to Cristina Domi, from TheSkyWriters.com, the fluid is approved by the U.S. Environmental Protection Agency, nontoxic and biodegradable.

The fluid sits in a reservoir near the engine, and a plane can typically carry about 30 gallons (114 liters), enough to write up to 12 letters [source: Sky-Writing.com].When the pilot decides it's time, he or she flips a switch in the cockpit, and the reservoir injects a stream of paraffin oil into the plane's exhaust system. As the fluid hits the exhaust pipes, it vaporizes, pouring from the exhaust outlets at the front and back of the plane. The streams of smoke then expand to about 75 feet (23 meters) wide [source: Hartill].

To vaporize the paraffin oil, the engine has to reach 1500 degrees Fahrenheit (816 C) [source: Library of Congress]. That's part of why skywriting planes need a lot of horsepower: In the cold of 2 miles (3.2 kilometers) up, producing that much heat takes a lot of power [source: Asbury-Oliver].

The word "PEPSI" requires 14 separate smoke triggers by the pilot [source: Olivers Flying Circus]. It's all about judgment and timing; the slightest hesitation can ruin a letter, and all is lost.

In a highly automated world, this kind of skywriting can feel like an anachronism, and maybe that's part of the appeal. The automated world has developed its own skywriting method, though. No split-second decisions. No flipping a switch. No inversions and loops. It's kind of like dot-matrix printing, but with planes. 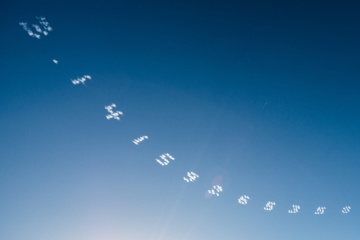 Pi in the sky (over Austin, March 2014). You can tell by looking at all the dots forming the numbers that this message was executed with skytyping.
© Jim Bennett/Corbis

It sounds pretty newfangled, but digital skywriting, or skytyping, has been around since the 1940s [source: Skytypers]. There are similarities between skytyping and skywriting. They both start at 10,000 feet (3,048 meters). They're dependent on weather conditions. They generate a similar finished product, though a skytyped message looks a bit neater (think "handwritten" vs. "typed"). And they use the same smoke-producing fluid and machinery. But in the case of skytyping, a computer program triggers the injection of fluid into the exhaust, not the pilot.

The writing processes are quite different. For one thing, skytyping uses multiple planes, typically at least five [source: Encyclopedia.com]. And there are no aerial acrobatics. The only fancy flying involved is formation flying: The planes fly side by side, equidistant and at the same altitude, for the entire time it takes to write the message.

The letters are made up of individual dots that blend together at a distance. Emitting the dots is entirely automated. A message is loaded into a computer that controls the smoke-emitting machinery in each plane. The program tracks the locations of every plane as they fly. Whenever a plane reaches a point where a dot should be placed, the computer triggers a burst of smoke from that plane.

The entire formation flies a predetermined distance, shifts position and then makes another pass to lay the next line of smoke dots. The passes continue until the message is complete.

Though digital skywriting requires less piloting finesse than manual skywriting, it's more expensive [source: Domi]. Gassing up five planes costs more than gassing up one. It does allow for more characters, though – often up to 30 -- since more planes means more paraffin oil [source: Sky-Writing.com].

Skywriting is experiencing a comeback in the 21st century. "Businesses are seeing the advantages there are with skytyping," says Cristina Domi. It's more flexible than "longhand," allowing for a more immediate, integrated experience. Since it's all centrally controlled, a message can be written or changed on the fly. Imagine skywriting the names of Oscar winners as soon as the envelopes are opened, or writing hashtags as the social-media response to a new iPhone unfolds.

But perhaps the best explanation for the surge in popularity is simpler: Skywriting offers more exposure than it used to. Now, physical visibility is moot. A skywritten message can be texted, tweeted or Instagrammed around the world immediately. And because it has novelty value, it typically is. Like TV ads, skywriting is now in people's homes. Or at least in their phones.

Social media's got it hands on the lost art. It's a wonder there are any skywriting secrets left to keep.

Not all of today's skywriters are intent on keeping the lost art's secrets. Some pilots and contractors seem to share pretty openly. Still, there appears to be something to Steve Oliver's comments about secrecy. I had a hard time finding detailed information on the smoke-producing "machinery" and the exact composition of the "paraffin-based fluid." And it's worth noting that Oliver gave a warning about the information that is out there: In the past, he said, skywriting pilots were known to provide false information to throw off their competitors. I believe I got it right. But if Oliver is to be believed, who knows. Or maybe Oliver is providing false information about providing false information ...