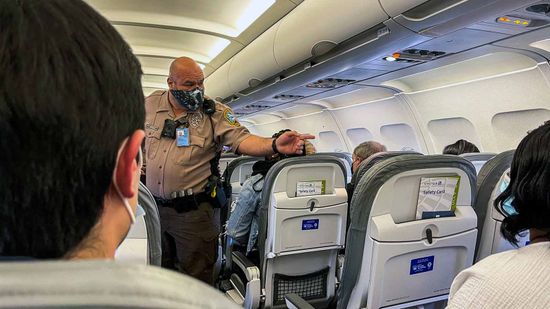 In an office that cruises a mile or more above the ground, being an airline crew member can be tiring, but rarely boring. Find out how pilots and flight attendants get you from gate to gate.

Inside an airport, luggage moves through an amazing and intricate system. The baggage handling system plays a crucial role in keeping travelers happy. Learn about these high-speed carts and conveyers.

Black boxes help investigators determine what happened in an airplane accident. What's inside a black box and how does it record flight data?

Did you know that airports were once known as "flying fields" because planes took off and landed in large fields? Journey through the hidden world of airports in this article, but without the stress, nail-biting and packages of peanuts.

There are about 5,000 planes in U.S. airspace every hour. How do these aircraft keep from colliding with each other? Learn about the intricate system that guides a plane from takeoff to landing.

Higher, farther, faster: NASA's X-43A plane is destined to set new speed records. What sets the X-43A apart from other rocket-powered aircraft is that it is powered by a scramjet engine. Learn all about it.

Flying in a glider is about as close as you can get to soaring like a bird. Amazingly, these graceful machines manage their maneuvers without an engine. Learn how gliders fly without power.

Blimps combine the simple buoyancy of a hot air balloon with the technology of an airplane. Learn all about these lighter-than-air vehicles.

Hot air balloons are about as simple as flying can get -- no engine, no moving parts really, and very little the pilot can do to control the vehicle. Find out what it's like to fly a hot air balloon!

The only passenger plane that flies faster than the speed of sound, and can get from New York to London in less than four hours, is calling it quits. Learn how this amazing plane works.

Airline pilots have an amazing job with huge responsibilities. Learn what it's like to be a pilot and what it takes to make it in this highly competitive profession.

How do they start jet engines on airplanes?

How do you start a gas turbine engine? What is the mechanism to begin the rotation of the large fan blades?

How does an afterburner work?

Afterburners allow a jet plane to take off from a short runway, such as the deck of an aircraft carrier. What, exactly, is an afterburner and how do they work? Learn the answer to this question in this article from HowStuffWorks.

Why doesn't the exhaust in a jet engine come out the front?

When an explosion occurs, the air rapidly expands around the ignition source. Why is it that in a jet engine the expanding gas doesn't force its way through the front of the engine? Find out the answer to this and other jet-related questions.

How much fuel does an international plane use for a trip?

How much fuel does an international plane use for a trip?

Why do those long, white clouds form behind jets flying high overhead?

Contrails are those long white clouds that form in the wake of an airplane flying at altitude. What causes these contrails and what are they made of? Learn the answer to this question in this article from HowStuffWorks.

I would like to know how airplanes can fly upside down and do loops. How does the fuel get to the engine if the plane is upside down?

How does an oxygen canister on an airplane work? How can heat generate oxygen?

Do commercial jets have locks on the doors and ignition keys?

Do commercial jets have locks on the doors and ignition keys? If not, what keeps someone from stealing them?

How does the toilet in a commercial airliner work?

When flushing the toilet in a passenger airplane, I'm amazed by the huge noise it makes -- like a powerful vacuum cleaner. Can you explain what makes this noise?

Ever wonder what's happening inside that huge jet engine as you're cruising along at 30,000 feet? Jets, helicopters and even some power plants use a class of engine called gas turbines, which produce their own pressurized gas to spin a turbine and create power.

The marvel we know as the helicopter began as a Chinese top consisting of a shaft -- a stick -- adorned with feathers on one end. They now buzz around the skies providing emergency medical assistance and your daily traffic report. Are you ready to meet the most versatile flying machines in existence today?