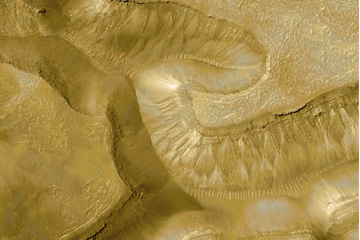 While water on the moon is a significant discovery, water on Mars may turn out to be the ticket for humans to leave Earth and live on another planet. But Mars suffers from the same problem as the moon in terms of atmospheric pressure limitations. While Mars does have an atmosphere, it's too thin and light to trap water vapor. Mars is essentially a dead planet, both geologically and with regard to terrestrial life. It's also too cold to contain liquid water on its surface. But that doesn't mean the prospect for future life is hopeless.

The Mars rover Spirit has discovered sulfate-rich soil beneath the ground, which suggests the past presence of liquid water. Similar samples of soil on Earth are found exclusively in wet dirt [source: Than]. Evidence has also led scientists to believe ice on Mars has and will continue to sublimate during a period of time when the planet tilts in just a way that its poles face the sun. In other words, the water vapor turns directly into a solid in the form of snow. When this snow accumulates, the lowest layer could be warm enough to melt into liquid water. In addition to the snow theory, NASA's Mars Reconnaissance Orbit probe revealed water ice in areas further away from the polar caps.

These discoveries provide hope that Mars could someday sustain life. At the very least, they set up nicely for a manned Martian mission. Humans could harvest this water much like they could on the moon. But they'll have to get there first, and traveling to Mars will be no easy feat. Let's crunch some numbers. At 36 million miles (57.9 million kilometers) away at its closest point, Mars is roughly 145 times as far away as the moon (using the average distance of 238,855 miles, or 384,400 kilometers) [sources: Dutch, NASA]. If NASA's Orion spacecraft were to travel similar speeds as the service module used in the Apollo missions to the moon (24,500 mph or 39,429 kilometers per hour), a trip to Mars would take 1,420 hours or roughly 59 days [source: Smithsonian]. The problem is, both Earth and Mars are in elliptical orbits around the sun. Because it takes Mars 687 days versus Earth's 365 days to complete a year, that "shortest" distance only works out once in every 25 months. So, in reality, it would take closer to 214 days [source: Cain].

Could this water lead to terrestrial life? To answer that, you have to think outside the box for a moment. Humans could attempt to transform Mars into a liveable planet. It's already been pointed out that Mars' atmosphere isn't suitable to sustain liquid water or water vapor. But what if we heated it up? Could we produce a thick layer similar to Earth's ozone layer?

Mars is on the edge of the habitable zone, so even if it was able to somehow obtain an atmosphere similar to Earth's, the temperatures would vary greatly at the poles and night and winter would borderline on inhabitable. Nevertheless, the discovery of water on Mars is a significant step in further space exploration. It also may be the key to whether scientists can ever determine if life in any form ever existed on the dead planet. But that's a discussion for another day.

For more information on space exploration and other related topics, see the links below.