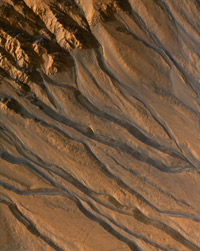 ­While the sudden appearance of depository streaks thrilled many scientists, others began to question the flash-flood theory. Further analysis of at least one of the gullies suggested that its shape didn't match the way fast-moving water flows. The deposits' fingerlike shape suggested something granular and dry, like fine-grained sand, rushed through the valley [source: Lovett].

However, the shape of the gullies doesn't completely discount the possibility that there was liquid water involved. Even if the gullies were carved by sand, wet conditions could have initiated the landslide or a­ small amount of water could have mixed with dirt and sand to form slurry [source: Lovett].

The images that first got scientists speculating came from the High Resolution Imaging Science Experiment (HiRISE), a camera that can capture minute landscape details and geologic structures. It's one of six instruments that make up the Mars Reconnaissance Orbiter, which was launched with the mission to hunt for evidence of water. Scientists hope the mission will also clarify the climate and geology of the planet, but the orbiter's scientific payload focuses squarely on H2­0.

By now, you've probably gathered that the orbiter isn't looking for some stray puddles or some body of water that scientists missed on previous surveys of the planet. Instead, the orbiter's cameras and spectrometers are searching for mineral deposits left by water. A sounder uses radar to find underground liquid reserves. Other cameras monitor clouds and dust storms. All the information from the Mars Reconnaissance Orbiter is relayed back to Earth through X-band and Ka-band radio waves that are picked up by the Deep Space Network antenna in Canberra, Australia.

The orbiter also returned evidence of clay mineral deposits that only could have formed due to rock-fracture plumbing and water altering the landscape in early Martian history. Scientists think that flowing Martian groundwater formed these crevices in the planet's distant past.

­The Mars Reconnaissance Orbiter wasn't the only spy on the red planet over the last year. While the orbiter examined Mars from space, the Phoenix Mars Lander entered the planet's atmosphere to scope out conditions on the ground.

We tend to take water and its properties for granted, but it's an unusual compound. Most planetary scientists agree: Liquid water is necessary for life. But why? The powerful solvent is able to dissolve molecules easily, allowing nutrients and metabolites to circulate.