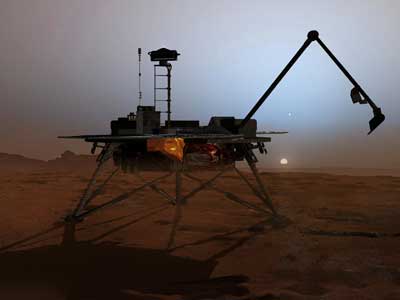 This artist's rendering depicts the Phoenix Mars Lander at work on the Martian surface.
Image courtesy NASA-JPL/University of Arizona

In May of 2008, the planet Mars received a rare visit from Earth. The Phoenix Mars Lander touched down in the previously unexplored far north to study Martian water. Such information could help scientists back home better judge if the planet could support life as we know it. After all, in the event of a manned mission to Mars, the presence of usable water could mean astronauts would have one less item to lug with them on their interplanetary trek.

­The lan­ding site was a prime area for exploration, since the northern polar region has plenty of water ice just beneath a very dry layer of soil. The Phoenix used its robotic arm to dig into the ground and collect samples of soil and ice, which were then analyzed for content. If that sounds like a piece of cake, bear in mind that it took earthbound scientists two full days just to successfully deploy the arm and prepare it for digging.

Despite the time and effort involved in every movement of the lander's limb, the Phoenix proved successful. It confirmed the presence of ice in the soil, glimpsed snow in the Martian sky and found evidence of both clay and calcium carbonate. This last discovery is particularly noteworthy since most clays and carbonates on Earth only form in the presence of liquid water.

The lander also discovered evidence of organic salts called perchlorates. Some experts argue that this last discovery kills the notion of life on Mars, as these salts rapidly decompose organic compounds. Still others hold out hope, pointing to some Earth species of bacteria that actually break down perchlorate. Might life on Mars have been similar to these bacteria?

That isn't the only new question scientists can look forward to tackling in future missions. The Phoenix also shed light on the red planet's humidity by using a spiky thermal and conductivity probe to detect rising and falling levels of water vapor in the air. Perplexingly enough, none of this moisture seems to collect on or in the thoroughly dry soil.

Originally scheduled for a three-month mission on the Martian surface, NASA renewed its mission twice and, even as cold October temperatures forced the scientists to begin shutting down the lander's systems, it was still sending readings back to Earth. While wintering on Mars most likely means frozen entombment in solid carbon dioxide, NASA hopes to revive the robotic lander when temperatures increase enough to allow all its systems to operate again and its solar panels to collect energy.

If Phoenix doesn't rise from the ashes in the Martian springtime, NASA will have to wait a few years before it lands a fresh set of electronic eyes on the planet's surface. The next mission to Mars is slated for a 2013 launch, when MAVEN, the Mars Atmosphere and Volatile Evolution spacecraft, makes its way to the red planet to study what might have happened to its atmosphere. The planet's atmosphere is currently so thin that exposed water can only remain stable in a solid or gaseous form. Scientists hope MAVEN will shed more light on Mars' wet past and if life in any form has ever existed on the planet. But for now, we know that there really is water on Mars. It's just not in the form that fills up your water glass.

Explore the links below to learn even more about Mars.