Critical Technologies of the Zumwalt Continued 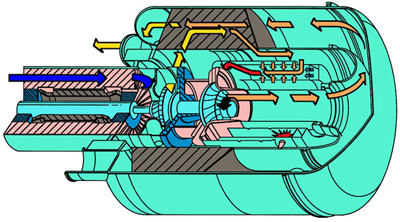 Two types of sonar arrays are gathered together in a single solution known as the Integrated Undersea Warfare system. High-frequency sonar is able to detect underwater minefields, while medium-frequency sonar sniffs out submarines and torpedoes. The dual-band sonar array is located in the bow of the ship, in a bulbous compartment that provides complete 360-degree coverage of the underwater environment.

Most warships today use a traditional mechanical-drive propulsion system with two separate sets of turbines - one for propulsion, the other for generating electricity for shipboard use. The drawback to this type of propulsion system is an inability to shift power to where it's needed most on the ship. Weapons, for example, can't borrow power from the propellers during battle. The Zumwalt class destroyer will overcome this problem with an Integrated Power System, or IPS.

Here's how the IPS works. The ship's engines will no longer be connected to the propellers. Instead, the engines - four marine gas turbines that Rolls-Royce describes as the most powerful gas turbines available today - will power generators that produce a total of 80 megawatts of electricity. That electrical power will then be distributed to most of the ship's systems and the electric motors that will drive the propellers. Because the power is centralized, it can be distributed as necessary to high-demand systems.

Ship designers have included an advanced damage-control system in the DDG 1000 to increase response time to ship-threatening events. The system combines sensors, cameras and automated firefighting capabilities and will improve survivability while reducing the number of crew members needed for damage control.

The stern deck of the DDG 1000 serves as a landing pad for helicopters, unmanned aerial vehicles or other aircraft.

A Spruance-class destroyer requires a crew of 330. An Oliver Hazard Perry frigate requires 200 personnel. Because so many of its systems are automated, the DDG 1000's crew will number 140. This reduces the ship's operational costs, but it also has benefits for crew members, who will enjoy larger rooms and improved living conditions.